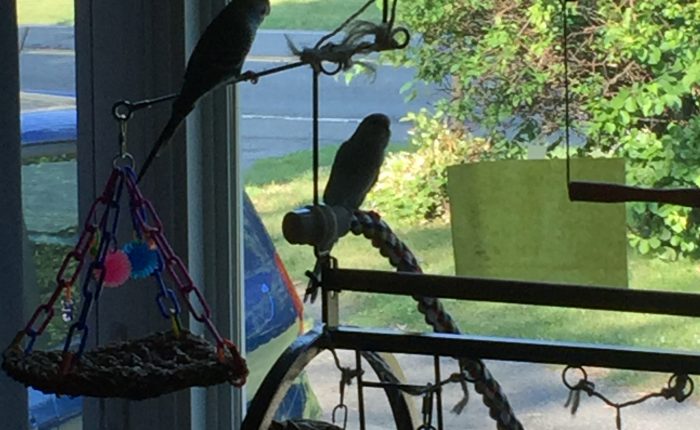 Your parakeet is out of the cage and looking at you like, “okay, what’s now? Amuse me people!” Some folks recommend taking your parakeet to a small, safe, room and shutting the door for these first interactions – that didn’t work for us, mainly due to the layout of our house, but in the end it was to our benefit, Toby will only hang out in the kitchen, dining room, and living room and I believe that’s because those are the rooms she was first introduced to. If she goes anywhere outside of that zone it’s either because she’s looking for one of us, or she feels like challenging the bird that lives in the bathroom mirror.

What also works in our favor on this issue is Toby’s fear, she was very reluctant to go exploring by herself, and wanted absolutely nothing to do with the floor. But, she did expect us to be fully available for his entertainment and security detail.

It may go without saying, please don’t leave your parakeet unattended while she’s out of the cage, particularly in these early times. There is no limit to the number of ways a parakeet can hurt himself in your home. I would say this goes double for parakeets with clipped wings, since they don’t have the ability to get themselves out of trouble by flying.

We set out to make areas outside of the cage that would be fun to Toby and would be clearly “hers”. We also spent a lot of time working with Toby on flying back and forth to each of us, and practicing stepping up, but felt like time out of the cage should also be at her leisure to enjoy flying and playing.

– which was only interesting to Toby if we were playing with it too, and was sort of a bust for us, although a perfectly nice product. She might have found it more interesting if her wings were clipped.

So, we moved on to the PrevueSmall Parrot Playstand

, as it comes out of the box it is fairly inappropriate for a small bird like a parakeet, but as you see below we quickly loaded it up with a ton of perches and toys, it’s very easy to hop around this way. On days that aren’t too hot we keep it in front of our big living room window so they can look outside, which they both enjoy (unless there are crows around).

and a couple of other small toys that are suspended securely from the ceiling. This is another favorite spot of both parakeets. Especially on nice days when the window is open and they can yell at all the outdoor birds.

Because it takes me a while to learn anything, I bought another table top stand, similar to the Prevue Hendryx Pet Products Big Steps Playground

, which was another utter fail. Toby is just as happy if I throw some toys out on the dining room table or couch.

A note about using your body as a perch – we were very permissive with Toby initially about where she was allowed to be on our bodies.

We were so excited about her not being afraid of anymore that we didn’t want to put any restrictions on Toby at all, and ultimately created a situation where she felt she was the alpha of our flock. I encourage you not to invite your parakeet to sit on your head or to perch on your glasses, even though it’s inarguably adorable. I ended up having an issue with Toby repeatedly trying to “preen” away some broken capillaries on my eyelids and trust me it is not desirable.

I’ve become aware that some people have parakeets who are happy to sit with them and watch tv or just chill out, if I ever find out what that’s like I’ll post an update! For now, both of our budgies are in constant motion while they are awake.

The TL:DR of this post is: once your parakeet is out of the cage keep a very close eye on him and expect to keep him amused, both by working on his skills, and also by having clearly designated areas for him to explore and use for play.