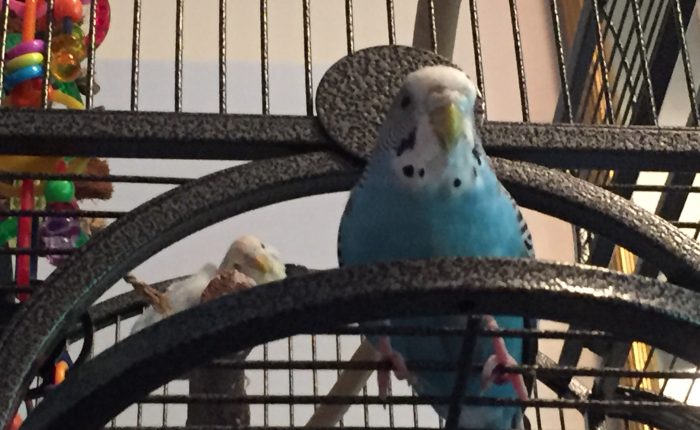 Seriously though, your parakeet will definitely poop on you and everything else. Parakeets poop about every 5-10 minutes. They even poop in their sleep! The good news is that their healthy poops are generally soft but dense, you can pick up a fresh poop just by touching it with a paper towel, and dried poops can be vacuumed or swept up easily.

Parakeet poop also does not stain, at least any fabric that I’ve worn around them so far. Do I suggest you throw on your best silk kimono before hanging out with birds, probably not, but you also don’t need to start sheeting yourself and everything else with plastic.

The house-wide poop issue applies more to parakeets that spend a lot of time out of their cages, and parakeets that are fully flighted, since a clipped parakeet will tend to hang out wherever you put him. The popular hang out spots for our parakeets all have some sort of easy to clean or disposable poop-catcher underneath, which cuts down on a lot of clean up.

On other spots that are not technically for the birds but get a lot of visits we’ll keep some folded up squares of paper towel to deal with poops as needed. The parakeets like to hang out with us on the couch, or on the table while I’m working at my laptop.

If they are running around on the floor together we come in after them and clean up anything they leave behind.

Larger parrots can be trained to poop only in certain spots, so when they have to go they return home (or to a specific perch) to do their business. I think that technically it might be possible to train a parakeet that way, they do have a “tell” of fluffing up a little bit right before they poop.  You could conceivably watch out for that, put him back on a perch each time and then reinforce with a treat/clicker training techniques. It would certainly take a lot of effort and vigilance and I’m not sure it would be worth it, the parakeet having to take a break in his fun time so often versus the relatively minor inconvenience of the poops.

I mentioned in an earlier post it’s probably not a great idea to encourage your parakeet to hang out on your head, even though it’s cute. Poop is another part of that warning. It’s easy to remove the poop should it occur, especially once dried, but I can see how there would be a level of “ick” involved for some.

Into every ‘keet life some poop must inevitably fall, but one you get over the initial weirdness of having to deal with bird poop it becomes just another part of your clean up routine.

Products in this post are copious amounts of paper towel