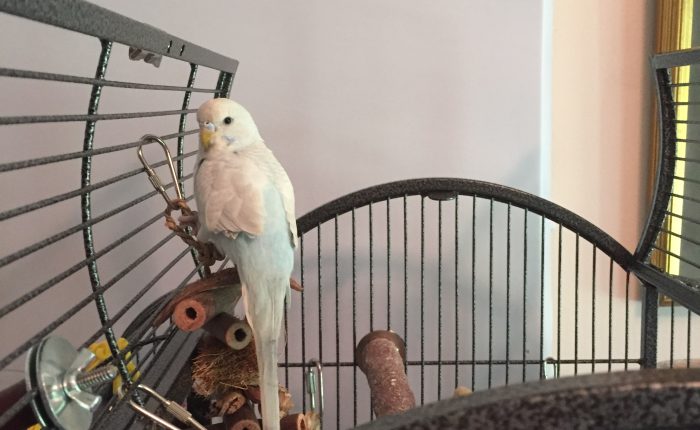 After about seven months with Toby as a solo parakeet I was pretty certain that we needed to add in a friend for her, but not everyone in my household was convinced. My husband was concerned that two parakeet should be way too much noise and upkeep.

Even though Patrick was staunchly undecided with leanings towards “absolutely not” I went ahead and started looking for hand fed parakeet breeders in our area. I knew that I didn’t want to devote another month (minimum) to taming a parakeet, and a hand fed baby would already be comfortable with humans and being handled.

After looking around on Craigslist and doing some Google searching I hadn’t come up with any solid local breeder leads.

I remembered that while we were at Petsmart picking out Toby we had been approached by another customer and we talked about birds for a while. She indicated that the best resource in our area by far is the Rensselaer Bird Center, which is a few towns over from where we live. So – I told Patrick that we should do some recon, visit the RBC and ask if they knew of any local breeders, and to my surprise he agreed to go.

That weekend we fired up the GPS and off we went, walking in to the RBC for the first time I felt a bit like I had gone to heaven, we immediately saw a senegal and a timneh grey hanging out on top of some cages, and after we tore our eyes away from them we realized there were birds everywhere of all shapes and sizes. Some of them were for sale, some were boarders, and many had come with their owners just to hang out. For someone like me who’s obsessed with parrots but doesn’t get a lot of face time with them it was a really magical experience.

Also, everyone in the store was incredible nice, warm and friendly; we couldn’t even tell the difference between the staff and the customers because they were all so welcoming. We we were greeted by someone who asked if we needed help, I explained I was looking for information on local hand fed parakeet breeders and she said….

“I just hatched a batch of babies, want to see them?”

YES, yes I do, thank you 🙂 we were led into a back room with an incubator full of tiny fluffy parakeet babies, most of who were on a very strict feeding schedule. The woman offered to put all of the babies that were old enough into a small bin so we could sit with them and pick one out. How could we possibly say no to that?

Patrick ended up picking out our parakeet; he was immediately drawn to the oldest baby, who seemed regal and not at all timid or afraid. Kelly very much still has an air that, even though she may occasionally deign to be silly, she is quite above us all.

We were able to come back as often as we liked to get Kelly used to us, which was amazing, and I brought my mom and stepdad over once too so they could meet our new family member. Knowing that we would be able to take her home in 3-4 weeks gave us ample time to get prepared, and we were sure to set the cage up and put it near Toby’s cage to help her get the idea that there might be a next door neighbor on the way.

I sort of expected some blowback from Patrick since he was railroaded into getting the new parakeet (even if it wasn’t my fault!), but once you see a bucket or baby parakeets you just can’t say no.

Finally it was time to bring Kelly home, get her settled in, and then worry about how the introduction to Toby would go – which is coming up in another post.

2 thoughts on “Finding and bringing home our second parakeet”