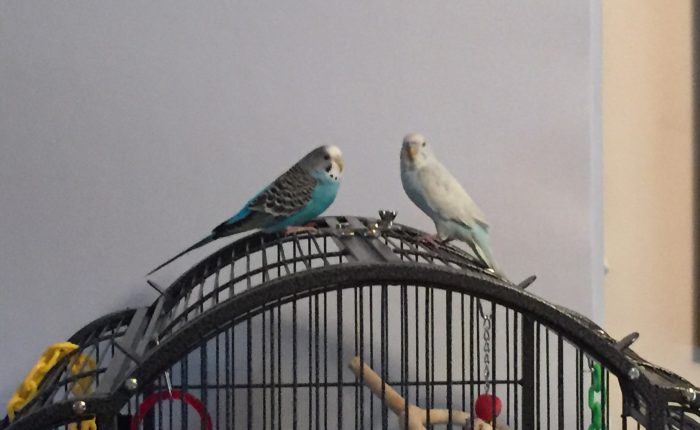 Finally it was time to bring Kelly home. We picked her up at the Rensselaer Bird Center and bought the below travel carrier while we were there, since the carrier we had previously purchased (A and E Cage Co. Soft Sided Travel Bird Carrier

) was regarded as a potential house of horrors by Toby, who would not go anywhere near it.

The RBC was kind enough to send us home with about a pound of the food that Kelly had been eating and recommended that we offer her food and water bowls on the floor of her cage, in addition to the bowls higher up, because she was used to ground feeding. I can’t say enough about how amazing the RBC was at answering our questions and giving us tips on easing Kelly’s transition and how to handle introducing the two of them.

Off we went with our new baby. It was a totally different experience, Kelly seemed unfazed by everything, she enjoyed looking out the car windows from the safety of her carrier and was relaxed the whole way home.

Once we arrived home we put Kelly in her starter cage, we always intended that Toby and Kelly would move in together, but worried that Toby might be territorial since she was used to living alone.

Because we had seen so much of Kelly and knew her to be an adaptable and fearless gal we expected she would have an easier transition than Toby, but it was actually very similar. Kelly sat in the same spot for about 8 hours without moving and then made her way down to find her food just before bed time. Based on our experiences I recommend bringing home a new parakeet as early in the day as possible so they have time to do the “sit and stare” and then relax a little bit before going to sleep in a strange place.

Toby – who we thought might be terrified of another parakeet given her fearful nature was immediately entranced by Kelly. She stared at Kelly for hours, no signs of fear or aggression, just fascination. We did notice that for the first few days Toby really packed in the food, as though Kelly was somehow going to steal it from the other cage.

The first day we keep them both inside their individual cages, Toby had gotten her last flight time as an only child earlier that morning and we thought seeing each other was excitement enough for day one.

Our plan was to have them out separately for the next few weeks so they could get to be friends in a more controlled way. It didn’t work out; Toby would get over stimulated and bite Kelly’s feet through the cage bars constantly, no matter who was in or out. Kelly apparently either enjoyed it or didn’t have the sense to stay towards the middle of her cage and so the pattern continued. It was very upsetting for me to watch, but they were both perfectly happy to keep doing it.

In order to save Kelly’s feet from excessive chomping we only waited a couple of days before bringing them out at the same time, with the hope that Kelly could at least defend her feet or hop away a bit better. Of course that raised other concerns about Toby have a clear advantage in being able to fly, whereas Kelly had been clipped pretty thoroughly and could only try to take flight and then sort of crash land with no control over her course.

Toby was quite over-excited the first few times they were out together, she would attack Kelly and then fly away repeatedly. No one sustained any damage, but I did break up a couple of fights, even though I knew they had to sort out who was going to be the top bird, it was too hard to watch.

Over a week or so Toby calmed down and they were able to play on the play gym at the same time, or hang out on the window perch without a constant battle for dominance. The next issue was that Toby got very intent about wanting to be with Kelly all the time, and if she couldn’t spot Kelly in the other cage he would flock call to him loudly and incessantly.

Have a mentioned that Toby is a little intense? She’s earnest and sweet, but tends to be serious and utterly determined and does not let things go.  She was mad at my husband once for months due to a minor infraction.

We had let Toby and Kelly want out in each other’s cages and it went well, and then one day when my husband was home from work he decided to just rip off the Band-Aid and move them in together. It was way earlier than we anticipated, but she was right, it was time. Toby felt much better having a roommate and was able to relax, as much as it’s possible for her to! Kelly had been used to living with her siblings at the bird center so didn’t mind having company, and was glad to move up to the bigger cage.

I know that we are all happier for having added to our family. I’m sure some parakeets are perfectly fine being solo but Toby was absolutely not one of them, I know she’s enjoying life a lot more now, and we are really glad we took the chance!