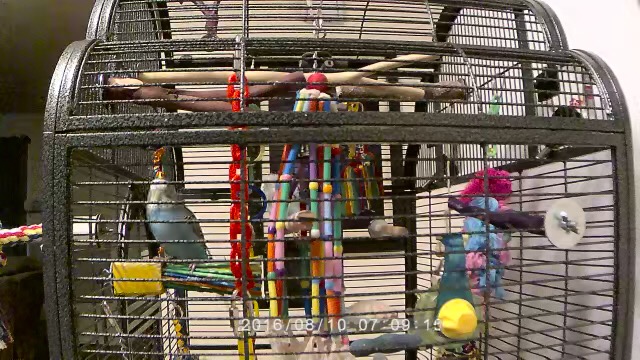 Well, I made it through vacationing away from the parakeets, and it wasn’t nearly as traumatic as I expected.

We were on a cruise and my original expectation was that on port days I would have cellular service, which turned out to be completely untrue. I ended up purchasing a package of wifi minutes on the ship, but I was never able to send/receive text messages or make calls. I emailed my mom as soon as I could to let her know, but everything was going perfectly well at home anyhow. She spent at least an hour there every day so the parakeets got some time out of the cage, and I know that she worked with Kelly on stepping up and not biting, which we have been struggling with. I was worried about losing ground with her while we were gone, but instead I think my mom made real progress.

As expected, the only one with any trouble was me, which was why we bought the MiSafes Mini 1080p HD Wireless Day & Night Wi-Fi Camera for iPhone iPad Android (Black)

before leaving. With Amazon Prime’s two day shipping I was able to purchase it during a freak out just a handful of days before the cruise.

Set up was a breeze, you plop the camera where you want it – it even includes a couple of mounting options, then download the misafescam app and pair the device to your phone. The picture is good, even in its normal quality mode, and you can switch to HD. The camera is in a fixed position which was perfect for our needs; we set it up to get a full view of the cage and were good to go. You could also insert an SD card and record, which I haven’t done since I’m only using it to peek in at them.

I love that there is a two-way speaker option so I can hear the birds singing away, we tested the ability to talk to them through the app and it worked, but I haven’t used it, thinking that could be pretty confusing for them. The night vision works very well too, although it’s a little creepy when they have their eyes open in the dark, you can see pinpoints of light.

The camera was comforting, although I didn’t use it as much as I planned due to the cellular issues. The ship’s wifi was not speedy and I wasn’t able to get the camera to connect every time. I also wound myself up the first night, we were staying in Miami and I had horrible cell service in out hotel room and no wifi. I checked on the parakeets at about 7:30pm and expected them to be bedded down for the night, instead they were still engaged in their nightly bouncing around before bed/fight for perch dominance routine.

I promptly lost service after that and wasn’t able to check on them until hours later, imagining all sorts of horrible scenarios of it getting to dark and them being stuck on perches they didn’t like, or having night terrors and me not being there to help them. When I finally got it to connect again they were absolutely fine, sleeping exactly where they usually do.

So – outside of external issues the camera has been fantastic. Even now that we are home I like to take a look at what they are up to during the day. If I ever felt like I didn’t need to look at them we could easily use this as a security camera, there’s an option to have it alert you if there’s movement in its field of vision, so I could see pointing it at the door and setting up that notification.

When we got back from the trip the ‘keets had a relatively brief period of readjustment where they seemed to be out of sorts and looking for my mom. Toby in particular kept flock calling when we were all in the same room. This has mostly worn off although I think Toby is still feeling a little mad at me it’s getting better every day.

At any rate, based on the level of anxiety I was feeling before we left I was pretty ready to write off taking week-long trips for a while. now that we are back I can see that a lot of my stress was unwarranted, the birds were totally fine, and I was as well!