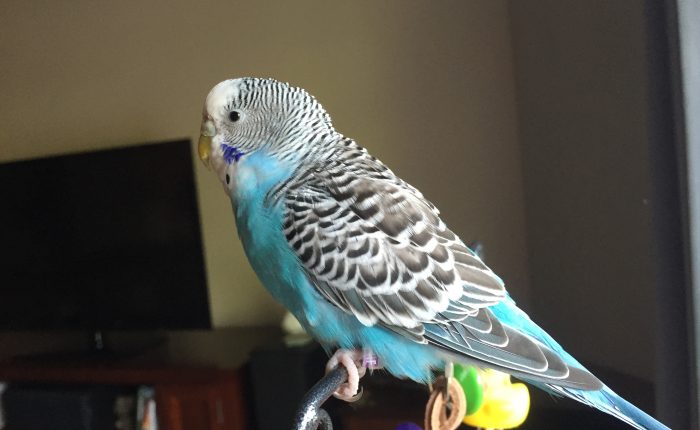 We had a very hot summer here in New York, Patrick and I historically haven’t used our central sir conditioning very much, some years we just tough out the heat, and others we install a window unit or two and blow around cool air on particularly warm days.

Life with budgies definitely changed that habit! Like a lot of animals, parakeets don’t have sweat glands, and when they overheat they don’t have too many ways to cool themselves down. Mostly, you’ll see them hold their wings out from their bodies to get some air flow going, which is something they also do when they are feeling very aggressive.

This summer, we found that we needed to use the central AC most days, but we kept it at 78 degrees, which was relatively comfortable for all parties, without breaking the bank on energy usage. If you’re using window units or fans around your parakeets, please don’t have direct cold airflow on the parakeets.  That goes for central AC vents as well. Additionally, if you have ceiling fans any fan without blade guards you will not want to use those when your budgies are out and about, as they can get seriously injured or killed being struck by a fan.

Budgies do best in temperatures that range from 65-85, but the key is about keeping the temperature relatively steady. A rapid 20 degree swing in either direction would be hard for them to cope with, but over a period of days/weeks they will adjust to increasing or decreasing temps.

As I write this it’s towards the end of September and looking at the weather forecast I’m expecting to turn on my heat towards the beginning of next week, usually we humans would tough out the first cold overnight dips, but the parakeets are not going to be comfortable at 64 degrees or lower; last winter we kept the house at a steady 68, which Toby seemed happy with.

So – an overheated budgie holds his wings out from his body to get some air flow to his “armpits”, what does a chilly budgie do? He fluffs all his feathers out to trap more heat between them, which looks a lot like preening behavior or sick budgie behavior. We only saw Toby do this a couple of times last winter, on days that were exceptionally frigid.

A parakeet is a warm weather bird that can acclimate reasonably well to a range of temperatures, but in addition to keeping them warm enough in winter you should also keep an eye on the humidity, they are happiest in 60-70% humidity, which certainly feels too damp for us. We shoot for 50% and keep track of it with an AcuRite 00613 Indoor Humidity Monitor

. Budgies without enough humidity can get dry, cracked feet, among other things, so you can also make sure your budgie is getting a bath in winter, or at least getting his feet wet to help with scaliness.

Another way to help your budgie regulate his temperature in winter is with a K&H Sand Thermo-Perch Heated Bird Perch – Small 10.5″

. The recommendation is to put it in the top 2/3 of the cage, so hopefully your parakeet will choose to sleep on it overnight and keep warm in dropping temps. We tried using this last year and Toby wanted nothing to do with it – avoided it like the plague. This year I thought perhaps Kelly would like it and show Toby there was no imminent danger, so I installed it directly below the most coveted sleeping perch.

They were fine with its existence all day; although no one wanted to touch it, but come lights out Toby would not settle down and basically acted like she couldn’t get to her sleeping perch because this hideous heated monster was in her way. We have a hard and fast rule now about not putting our hands in the cage after “bed time”, so all I could do was unplug the vile thing and hope that was the issue.

Toby did settle down shortly after, although I’m not sure whether I can truly draw a correlation or whether she was just exhausted. Either way, I took it out the next morning. We may end up using it like we did last year, when we installed it very low in the cage and just hoped that some of the small amount of heat radiating out would help. There are tons of great reviews of these; I think it’s a useful and safe product, Toby is just to fearful for it to work out as intended. It comes in two textures, I purchased the sand-like option, which I would also recommend, I read several reviews of parrots not being able to get a grip on the smooth version.

When it actually gets cold I’m going to buy and try the K&H Manufacturing Snuggle Up Bird Warmer, Small/Medium Grey

– I am sure that since it’s gray Toby will want nothing to do with it, but at least I could put it somewhere that’s not near sleep town and maybe Kelly will enjoy it, or Toby will accidentally end up near it once in a while. I’ll report back after we’ve given tried it out.

Bottom line on parakeet temperatures is to watch out for rapid swings in either directions and you should be okay. I’ve seen parronts reporting that they keep their homes in the low 60’s in winter and their budgies adjust, and I’m sure that not everyone has central air conditioning in summer, or even necessarily window AC units. Keep in mind that if you’re uncomfortable with the temperature they probably are too, and you should be good to go.