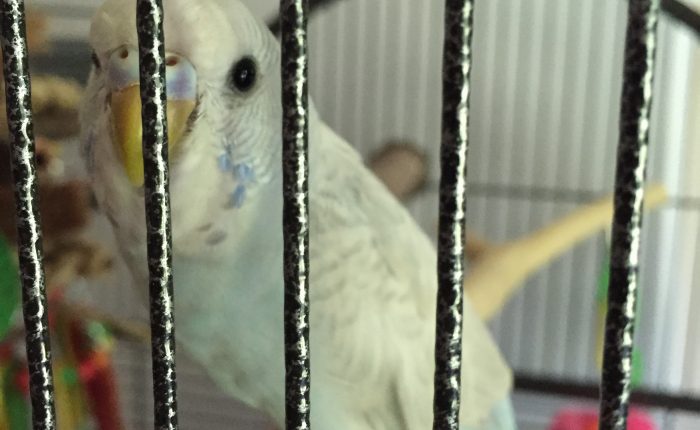 If you’ve been following along, you know that our second parakeet, Kelly, who we got from the Rensselaer Bird Center in mid-June of this year, has viewed my husband and me at best as an annoying necessity and at worst as a couple of jerks who just won’t get out of her face.

Over the past couple of weeks we’ve finally seen some relaxation on her part. Initially, I’d pretty much have to force Kelly to step up and sort of chase her around inside the cage – even if I knew she desperately wanted to get somewhere. Then, I realized that if I stood near the cage either with my back to her or looking down and away she would hop onto my shoulder or finger willingly and I could take her to the play gym or window perch. I also discovered that if I closed my eyes and rested my head against the cage she would feel safe to come over and groom my hair and nibble on my glasses.

Recently, she has sometimes started coming to me as I approach the cage and hopping onto my hand or shoulder whether I’m looking at her or not, and finally yesterday she hopped on my shoulder and didn’t even want to go anywhere in particular! I walked her around to her usual haunts but she chose to stay with me, which felt pretty great.

I’ve also been able to put my hand in the cage and step her up just to move her around without getting bit. We also noticed that she has stopped defensively chattering at anyone who approaches her cage, even in the evening, which had previously been a big no-no as far as she was concerned.

It’s such a relief that she’s starting to trust us and not be so fearful; the whole experience has been very eye-opening. We had been so sure that getting to know Kelly while she was still being hand fed at the Rensselaer Bird Center would make a difference in how she felt about us once she was home, which it did not. We also put too much stock in her personality  making the transition easier; while she was at the RBC she was very confident and they remarked on how adventurous she was. As soon as we got her home, though, she was just as terrified as a feral budgie.

I think now we are starting to see the first glimmers of her personality reemerging, she’s walking off into rooms that she’s not familiar with and being more curious about new things in a way that Toby isn’t. She’s in her first molt currently but hasn’t grown in any feathers that would enable her to fly, I think once that happens we are going to have to keep a very close eye on her, I bet it will really bring back her confidence and daring.

Our goal is to make sure she feels like we are part of her flock by the time she’s flying, I think we’re almost there and just need to keep showing her that we are useful and fun, and good to be pals with! I put too much stock in the idea that Kelly seeing how comfortable Toby is with us would impact her comfort levels, and it has helped us make some inroads, but it wasn’t an all-access pass.

As much as we’ve been frustrated because of our own preconceived ideas of how a hand fed and clipped parakeet would be different, it’s been wonderful to see Kelly open up and start trusting us. We were so lucky that she and Toby took to each other immediately, even though Toby was over-zealous at first, otherwise Kelly would have been a very lonely and scared little lady!

2 thoughts on “Update on Kelly’s taming”