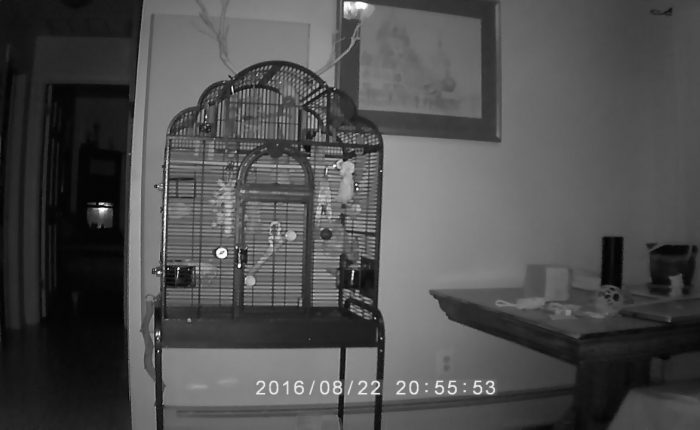 If you’ve done a bare minimum of research about parakeets you’ve already read that they need 10-12 hour of sleep per night to be healthy. Beyond just needing the sleep, they also need that length of time in dim lighting so that they don’t start wanting to breed.  Our parakeet’s cage is near a big window, so we close that curtain around 6pm and start turning down their main light shortly after. They are usually fast asleep by 7:00pm or 7:30pm at the latest if they are being willful about having just a few more minutes to play.

That length of time in the dark and quiet can be pretty hard to achieve in a busy household – it’s also kind of paradoxical, because the recommendation that your parakeet’s  cage in the center of the action so they feel like part of your flock is very incompatible with needing a lot of rest!

as a sleeping cage in another room, but I have several reservations about that. One is that it would take potentially months to get them used to that kind of routine. Also, since Toby is so neophobic, there isn’t really another room in the house she feels comfortable in, so that would be a huge hurdle. And finally, since we’ve decided (at least for the short-term) to keep taking vacations, I would hate to get them used to a different sleeping cage and then mess up their routine when we go away, potentially resulting in sleepless nights.

Unless we move, or make major changes, we are stuck having the birds bed down in their main cage, which is in our dining area. Unfortunately, it’s open to the rest of the “public areas” of the house, including the kitchen and the living room where we watch television in the evenings. Thus far both parakeets seem really well-adjusted to it, we turn the lights way down when they go to bed and we watch television at a polite volume. They go through a settling in routine and then grind their beaks before nodding off. Fortunately, they aren’t in eye line of the television, I’m sure that’s a huge help. I also try to be respectful and not watch content that would wind them up during the day, so I avoid musicals, loud fights scenes and anything with a lot of bird or other animal noises.

It’s really not ideal for any of us, especially if the humans want to go get a snack in the kitchen after dark, we can’t turn on the overhead lights so it’s all down to the refrigerator light! Although this has probably helped curb some late night snacking so I shouldn’t complain.

A lot of the sneaking around would be alleviated with the use of a cage cover at night – I’ve tried Prevue Hendryx Pet Products Universal Bird Cage Cover, Large, Black

, which goes over the top of the cage, but Toby wants no part of it, she panics and has a terror response, flapping around the cage wildly with immense potential to hurt herself. I think anything black is going to be a deal breaker for her; it’s one of the many things she just doesn’t tolerate. I haven’t found one yet, but if a cover exists that attaches magnetically to the sides so the top is still open, and the fabric is white or light in color she might go for that.

The other thing I’ve considered is getting a room divider that we move in and out – although I’m not sure how Toby would take to that either, it would be a great visual block that doesn’t actually touch the cage. The only thing that’s holding me back on that one is that Patrick’s severe allergies mean he’s sensitive to new items, many products go through a period of “off gassing” once they are out of their box and in your home, during which time they smell very strongly of whatever paint, varnish, or other material was used to coat or polish them.

even though it’s gorgeous and functional. New wood furniture tends to have a very strong smell for months if not years, but something like the Coaster 4-Panel Elegant Room Divider Screen, Ivory Fabric, Metal Frame

might work since it’s metal and fabric. It’s really a matter of having the expendable funds to buy something that is a risk for both parakeet and husband acceptance. It also means finding a place to store it during the day, and in a small house that’s not easy.

In the meantime I think we’re doing the best we can to ensure the budgies get the rest they need, and any sleep lost during the night is probably made up with the numerous cat naps they take during the day.