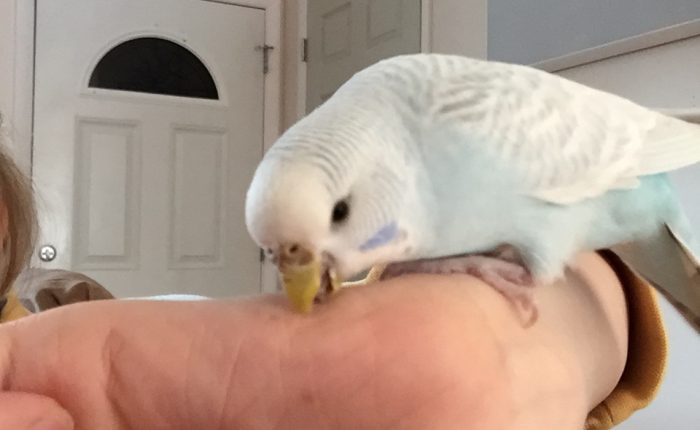 I have written before about our struggles with Kelly and biting, which were relatively unexpected since she was handfed and socialized by her breeder.  Well, we have just reached the next level of biting mania and willfulness.

There is a period of time during which a budgie is no longer a baby (after their first big molt) and before they are mature (about 1 year old).  During this time they do a lot of testing boundaries, acting out, and generally being defiant. Compounding this issue is that she’s come into breeding condition for the first time, so she’s very territorial and hormonal.

Kelly launched herself into this period with some real flair. She went from being scared of being on the couch one day to trying to burrow into it and shred the seams the next, she also decided that the dining room table wasn’t scary anymore and, in fact, needs to be turned into match sticks.  So, I can see that we are going to be doing a lot of “time outs” over the next few months.

The worst part is that the occasional biting has shifted in to high gear and is serious limit-testing.  I had a few bad moments the other day where I was surprised by it and ended up doing more of a frantic flap than a gentle roll to put her off balance.  She seems to know where the softest spots are and digs in.

We’ve pretty well failed on every method of deterrence so far, including: blowing on her lightly, saying no, putting her back in the cage, gently rolling our hands to keep her off balance and/or just not reacting to bites.

The crazy thing is that she only hates hands, you can put your face next to her and no matter what she will never bite it, she can even be trusted to groom eyebrows and have access to your nose. There is simply a major disconnect between the hands and the rest of the body.

I considered leaving her alone for a while but she loves being with us, she always wants to be on her people and preen our hair or explore our sweatshirts and it’s obvious that she enjoys interacting with us as much we enjoy her. And enjoy her we do, I hope that I don’t sound too Kelly-negative, she is so much fun and I wouldn’t change her for any other budgie. Going forward, I’m going to take a two-pronged approach, 1st I’m not going to step her up any more unless it’s in the context of structured reward-based clicker training. She needs a distraction as soon as she’s on the hand or she starts biting immediately and hopefully with the clicker training we can extend that period of time until she doesn’t bite at all. 2nd In case the hand issue is based in fear I’m going to work on allowing her to explore my hands when they are flat down on a surface and do not move at all. This may end up in me getting bit many more times as she examines the various textures of a hand, but hopefully it will help her become more comfortable with them.

Toby was pretty easy to convince that hands are benevolent bird-like objects, if we crook a finger at her and “nod” it she nods right back, beaks the fingernail gently and pins her eyes like she is greeting another bird (it IS as cute as it sounds).   Kelly, so far, is just not having it, but I know we went through this with Toby too; she did not bite this hard though.

Anyway – this has been sort of a rambling post.  The points are primarily that many parrots go through a “teenager” like phase where they are quite unmanageable and you may wonder where your sweet baby has gone. This is okay; they need to assert their independence and they will go back to being their nice selves after a while.  Also, sometimes even though a budgie has no reason to be a biter they are, and all of the tried-and-true methods of dealing with biting may fail – this is okay, just have patience and keep trying, and if you need to give up because you are too frustrated, that’s fine too, you can accept your budgie on their terms.  Biting, in my opinion, is not a valid reason to rehome a budgie, unless they are injuring other members of their bird-flock and simply must be single birds. Even in that case, actually, if you have the space and means to house them separately then please do that.

So, wish us luck and if you’ve got any other ideas let me know!