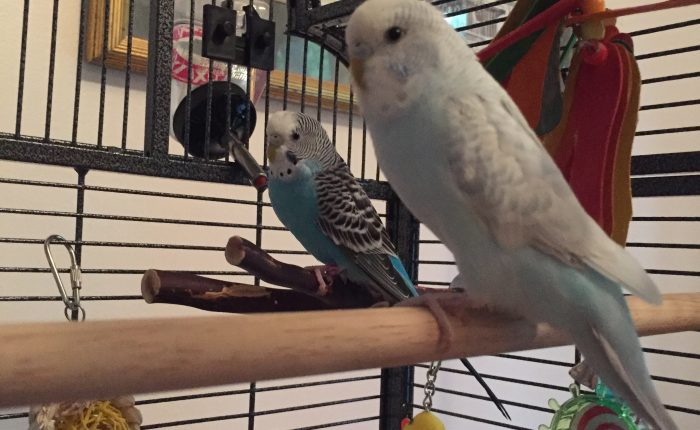 This is a very similar post to when will my parakeet let me pet him, in that the answer is typically “don’t count on it”.   Many parakeets may learn to mumble a few garbled words, but fewer will be intelligible and barely any will have the clarity and vocabulary of a Disco the parakeet.

There is some correlation between budgies that learn to talk and sex, boys tend to be a lot more vocal in general, have sweeter songs, and a greater capacity for speech. When we first brought Toby home we thought she was a boy, I knew some about how the color of the budgie’s cere can be used to determine the sex, but I didn’t know that it was different when they are juveniles.  So, I should have been looking for a baby with a solid pink cere which would have absolutely been a boy, instead all I knew was boy=blue, not that young hens typically have light blue ceres with white around their nares (nostrils).

The employee at the pet store where we got Toby also said it looked like she was a boy, of course I know now that pet store workers typically have no specialized knowledge, and though the employee was well-intentioned, he probably knew about as much as we did about parakeets.

Anyhow, the result was that we brought home a girl thinking she was a boy, and even though she proved to be mostly quiet over the next couple of months we tried and tried to teach her to speak a simple two word phrase. We held her close to our mouths and made sure she was watching while we slowly sounded out the same words over and over and I’m sure she thought she’d been brought home by lunatics. When that failed, we moved on to playing YouTube clips on repeat of phrases, with the same lack of any result.

When we brought home Kelly we knew sooner that she was a female, and in the past six months we have mostly focused on trying to teach them any sort of cool sound, like playing the Lyre bird, which Toby really responds to and also this reel of R2-D2 noises with the screeching taken out.  Patrick thinks he hears them do some R2-D2 on occasion, but I’m not sure about that.

If you have a young male budgie he may be quite inclined to speak, if you repeat the same words and phrases often ie: “pretty bird” he might even pick them up on his own.  I’ve heard also that many females are capable of learning words.  I think it must depend mostly on the individual parakeet’s interest level, with a better chance of interest in males vs. females.

Originally we were pretty invested in Toby learning a word or two, and working with her on that dovetailed neatly with getting her hand tamed anyway, but if your budgie doesn’t seem interested in learning to speak then I would waste a lot of time on it, there are tons of other fun things you can teach your budgie and their natural vocalizations are (in my opinion) pleasant enough anyway.