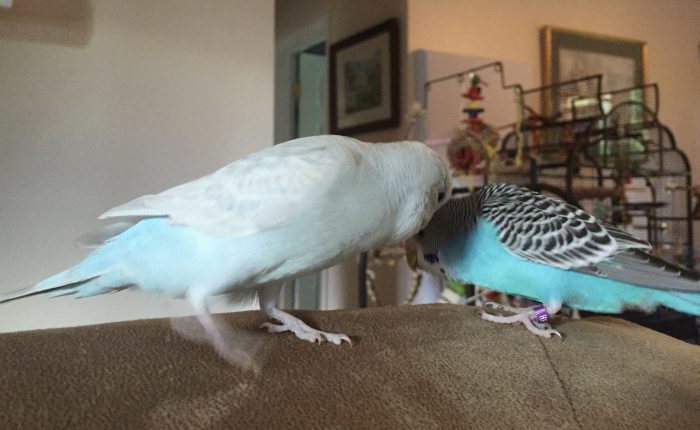 If I was starting fresh with zero parakeets right now, choosing which sex to get would be very easy. I would get two males, no question. A pair of males will almost always get along well, and I wouldn’t have to worry about anyone laying eggs and accompanying issues like becoming egg bound.

A male/female pairing might work, but the female could end up bullying the male and being overly territorial, and I really don’t want to breed parakeets. So, if they mated and began laying I would have to do stuff like steal eggs, boil them and return them to the cage so that they could have the experience of taking care of the eggs, without actually having baby parakeets.  I feel uncomfortable just thinking about doing that.  I know there’s no guarantee that would actually happen, and by not providing a nesting box and keeping daylight hours limited I could possibly avoid laying, but it’s just things I do not want to deal with as a parront.

Female/female is what we have now, and it’s working out pretty well.  Despite the fact that many people will tell you two females is impossible and they will kill each other, Toby and Kelly hang out together all day, preen each other, flock call when they are separated and generally seem to enjoy each other’s company.

But, they are both territorial, so from dawn till dusk (or later!) we do have intermittent squabbles that are usually about food bowls or toys. The key to keeping these relatively civil is to have a big enough cage for everyone to have their sense of space, and also to duplicate the important stuff. We have two food dishes, two waters and two perches for sleeping at the top of the cage.  They’ve been living together for over 6 months now and no one has ever drawn blood, so I consider that a success.

So – two female budgies can live together in my experience, which is, of course, limited to these two budgies.  We did also discuss this with the Rensselaer Bird Center staff when we took Kelly home, and they stated that in all their many years of breeding and housing budgies, two females had only ever had to be separated one time.  Like many of these issues, I’m sure it comes down to the individual bird, but you can sway it towards the positive by providing optimal living conditions.