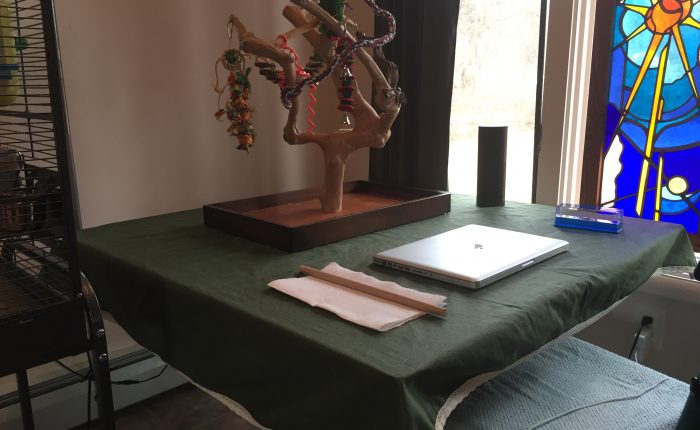 As I’ve mentioned, Kelly recently got over her fear of everything and is now quite a handful, more precisely, a handful of constantly chewing beak.  Which is totally normal, parrots are machines built for destruction, and the only saving grace of a budgie is its small size and (relatively) weak beak.  If Kelly was an African Gray or a Macaw I would probably have no wood furniture or door frames left at this point.

Since she can’t take it to that extent, Kelly limits herself to chewing on approved toys for the most part, but the exception is the edge of our dining room table.  Toby went through a brief table-mania last year, but was easily dissuaded from the pursuit.  Kelly, not so much, she is determined to turn that thing into matchsticks one chomp at a time.

I can’t even be mad at her for it, seriously, it’s what she’s meant to do, so it’s on me to find a workaround and shooing her away 500 times a day isn’t cutting it.  Also, I don’t know what varnish or veneer is on the table, and I don’t want her to slowly poison herself chewing on the wood.

My first idea was to take a long sheet of paper towels and drape it over the edge in question, weighting it with a couple of toys. This worked well, both Kelly and Toby enjoyed climbing up and down the hanging paper towel and it distracted from the table itself.  But, I’m not feeling that style of home décor, so a more permanent solution was needed.

I decided to buy a tablecloth, I’m pretty sure this is the first tablecloth I have ever purchased.  I didn’t want to spend a ton of money, but I was looking for something that would be visually appealing to both the parakeets and the humans, and seemed durable.

in sage green, which is a color that Toby likes. Taking it out of the box I noticed immediately that the fabric is nice and tightly woven and has a sheen to it, which has been great, it’s really easy to just wipe poops off of it, and small amounts of liquid don’t sink through. Also because of the tight weave it will take the budgies a while to destroy. It can be machine washed and line dried and that may be easier to manage than it currently is wiping down the table all the time.

I also like the lace edging. I know I’ll have to make sure they don’t eat it, but they will enjoy ripping it apart. It seems sort of odd to buy a nice item knowing that it’s basically going to be treated as disposable, but it will certainly be cheaper to replace than a whole table. Also, if they only attack one side I can rotate the tablecloth a few times for maximum use.

Hopefully this will be a good save for the table, I’m sure in a few weeks Kelly will figure out she can climb down and underneath and I’ll have a whole new set of issues.  Coming soon, presumably, a post about getting rid of our dining room table and turning the entire house into an aviary 🙂

where has my table edge gone?

3 thoughts on “Buying a tablecloth for your budgie”