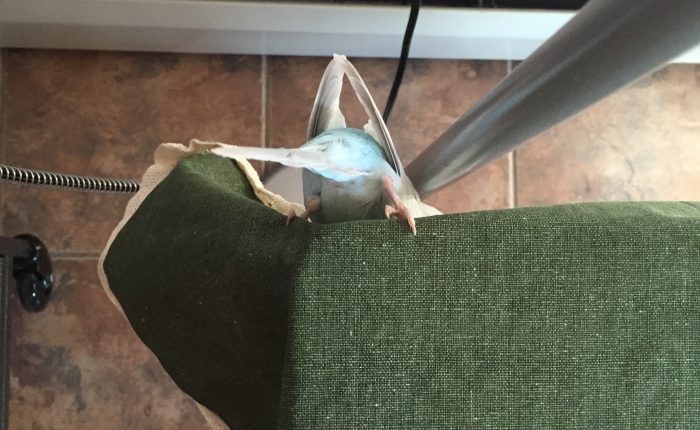 For several months Kelly has been having a love affair with the dining room table; more specifically, a love affair that involves trying to chew it to bits.  In a bid to protect the table from Kelly AND Kelly from the table I have draped the edges in paper towel, then bought a tablecloth, and THEN had to put paper cage liners underneath the tablecloth.

At any rate, aside from a few episodes of intensely trying to get back to the table’s edge I thought Kelly was pretty much over the relationship, until the day I accidentally left one of their food bowl access doors open….

Every morning when I wake up one of my first tasks is to refresh the parakeets’ food and water; sometimes I swap the bowls around in the 3 available holders, just to keep life interesting.  That morning was such a time; I removed the top food bowl, dumped it and refilled, and then put it back in a lower slot.  Unwittingly, I also left the top door unlatched and merely pushed close to the cage.

).  If I’m feeling stressed out I find it calming to listen to them singing along with music or even yelling at each other; sometimes I just take a peek very quickly to make sure they are both doing okay.  I’m only about 20 minutes away from home during the day, so if I saw that one of them was stuck on a toy or otherwise distressed I could get to them pretty quickly.

So, I opened my camera app, and noticed Toby right away, which is almost always the case since blue is much easier to spot than off-white. But, I couldn’t find Kelly for the life of me. I zoomed in as much as possible on the feed and searched every corner of the cage and she was invisible.  After a few minutes I decided she must be behind a toy taking a nap. I closed the camera app and promptly forgot about it until I got home.

As I approached the cage I realized the food door was ajar by quite a bit, and immediately realized what I had done. But I knew the door hadn’t been open by that much, I would certainly have noticed that and if I missed it my husband would have before he left for work.

I saw both budgies were in the cage and began praising them lavishly and at great length for being such good girls and staying in the cage when I wasn’t home.  I noticed that Kelly was being more standoffish than usual and Toby was acting a bit odd too, she came to the open food door to greet me but acted very cute and sheepish and didn’t come out of the cage. I thought maybe they were just freaked out that the door had been open all day; you never can tell what’s going to throw a parakeet into an emotional crisis! And I knew at once that Kelly had left the cage, spent some quality time with her true love, the table edge, and then put herself back home.  The tablecloth doesn’t have any damage at all, so I have to assume that she crawled up under it and hung on while chewing.

My guess is that she either went back to the cage when the robot vacuum came out at 2pm, because neither budgie likes him whatsoever.  Alternately, their avian lamp is on a timer to go off at 3pm, so she may have made a connection that I come home after that light goes off.  Or possibly she just tired out and got hungry for actual food.

Regardless, it’s another huge warning to me that these guys are smart and I need to be on my game!  I’m so relieved that they didn’t get up to anything dangerous, I’m pretty sure that Toby didn’t even leave the cage, but next time we probably wouldn’t be that lucky.