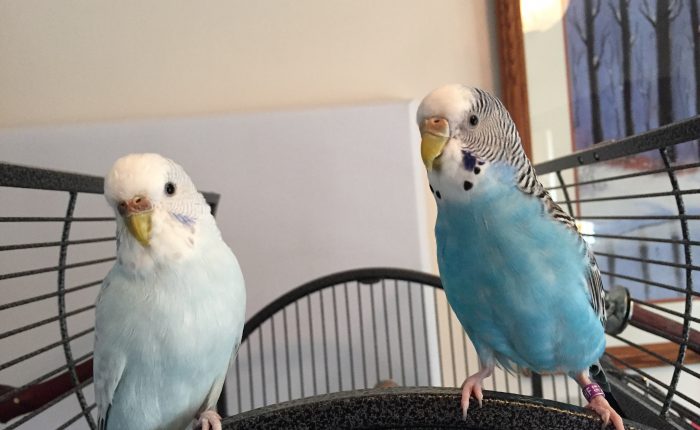 It was a Sunday evening in February, about 5:30pm. The budgies were enjoying their last half hour of time outside the cage, all the curtains were shut for their safety, since it was pitch dark outside.  My husband and I were watching tv when I got a text from our local police department, warning of potential localized power outages due to fire department activity involving a transformer. I immediately felt a surge of panic, if the lights went out, how in the world would I get the parakeets into their cages safely?

We sprang into action and they were fortunately cooperative about going right to their cage.  We never ended up losing power, but it left me wondering: if there’s a blackout how will they deal with complete dark? They are used to at least having night lights on at all times to help combat the possibility of night frights.

, but at that price point it’s a major investment, and I knew I needed to figure something out for the short term possibilities.

Particularly since, and this is a bit embarrassing, I know that we have flashlights, but I couldn’t tell you where they are, or whether the batteries are good. So – if the power goes out we’d be stumbling around with just the light of our smart phones, which is clearly the start of a horror movie.  Add a couple of panicked parakeets into the mix and I think you’re in for something potentially gory.

To avoid any Saw

-like outcomes I went online and started looking for something I could have on deck for sudden power loss. I found the American Red Cross Blackout Buddy

and at about $14 it was a lot easier on the wallet than the big generator.

These emergency flashlights have recharging batteries and three modes, the first is nightlight mode, the second is flashlight mode and the third is emergency mode. When the power goes out the flashlight senses the interruption in power and turns on as an emergency light.

A few things I really like about this product are that the plug is intelligently placed so the flashlight can be plugged into the bottom outlet without covering the top. Also, the plug can be folded into the back of the flashlight to make it comfortable to carry around.  The lights are nice and bright too, which you’d want in an emergency.

The major downside to this product is that it has a very strong plastic smell. A few of the reviews note that it dissipates after a few days, but we’ve had ours for a couple of weeks and they are still quite fragrant.  Of course this means they are quarantined in the hallway with everything else that has to off-gas before coming into the house proper. They are currently not doing us very much good. I don’t think the smell would be as big an issue in most households, we just happen to have some serious restrictions in place.

Even with the downside I do recommend this light, particularly since your budgies probably like a nightlight anyway, this kills several birds with one stone. Or, rather, renders the birds safe from killing… (ha! probably should have had a dad joke warning there)

I still worry, even though I can go grab my emergency flashlight from the hallway in a pinch, what would it be like if we had a major power outage? Particularly in winter, I don’t have a secondary source of heat beyond our gas furnace and the parakeets won’t tolerate a rapidly dropping temperature very well. My short term plan would be to corral them into their travel carrier

and put a fleece blanket

over it to conserve their body heat. If we were going to have a longer outage then I guess we’d have to decamp to my mom’s house (that’s your heads up mom!), where there is a generator.

We’ve been lucky lately, in the past several years I can count on one hand the number of times we’ve lost power. Even in those instances it was for no more than half an hour. But, I do want to prepare for the inevitability of disaster (not being dramatic at all) and the emergency lights feel like a good first step.

4 thoughts on “What do you do if the lights suddenly go out?”