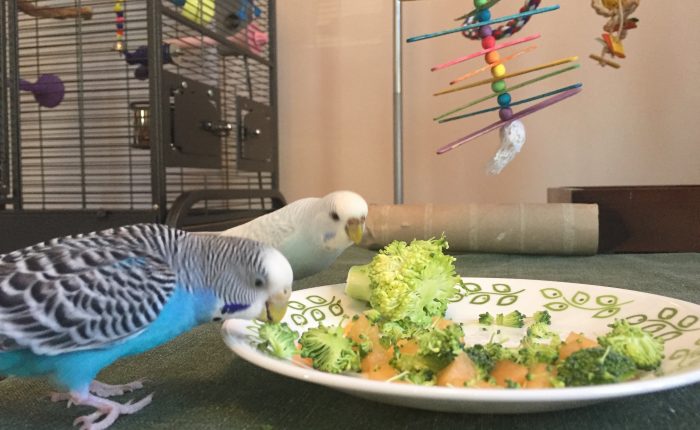 I spent a single blog post on both sense of sight and sense of hearing, but smell and taste are going to end up lumped in together! This is largely because they are less essential to the parakeet and probably impact his behavior less in your home.

As far as smell goes, all the scientists appear to agree that parakeets have the ability to smell; but they don’t really agree on how good the sense is or how much they use it to function. Some say it’s almost as good as humans and they use it for foraging and to find their way home in the wild. Others say it’s quite limited, or possibly they just don’t use it that much. Either way, they probably rely much more on their sense of sight to locate food and their sense of sight and hearing combined to evade predators.

Sense of taste is less developed in parakeets than it in in humans. They have fewer taste buds and those taste buds are located at the base of their tongue. They can probably detect sweet and sour. They can also tolerate spicy peppers because their receptors for spice don’t react the way ours do.  Individual parakeets have different preferences for foods based on taste. Some parakeets can have quite a sweet tooth for fruits, but due to sugar content these should be treats only and not fed on a daily basis. In our house, Toby likes vegetables and shies away from the sweeter stuff, while Kelly is equal opportunity but really loves peaches and strawberry.

So – why would these senses be so much less developed than sight and hearing?  Well, it really wouldn’t suit a forager to be too concerned with how good their food tasted or smelled, since they basically have to live on whatever they can scrounge up.  They can tell by sight if a fruit or vegetable is spoiled, so no sense of taste needed there.

Also a sense of taste would certainly be no use in getting away from a predator, although I could see how a sense of smell might be a good alert system, having an incredible panoramic view and a keen sense of hearing are probably good enough.

This does mean that you can’t use the smell of a certain food to entice your budgies into trying something new, but you can show them it’s good to eat by eating it yourself.  You can also get them excited by making noises associated with food preparation. Mine just have to hear their dish come out of the cabinet and they immediately start watching me closely.

A note – the sense of smell being poor doesn’t mean they are less sensitive to fragrances and chemical odors. On the contrary things such as candles and Teflon are toxic to birds and kill them by destroying their lungs. It does, however, mean that your parakeet won’t be put off if you want to hang out with him after coming home from the gym a bit ripe – so that’s a bonus!