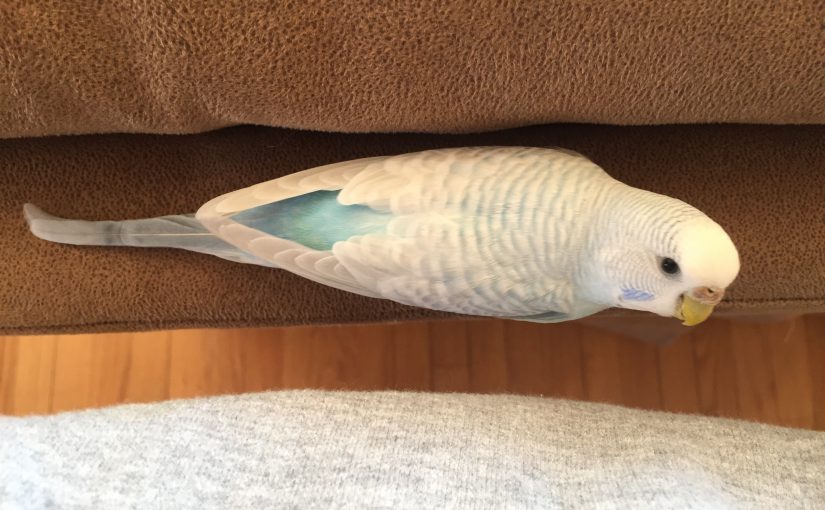 This past winter Kelly’s juvenile hand biting, which initially seemed like very normal parakeet exploratory biting, turned into major hand aggression.  She was simultaneously going through her “teenage” phase, entering breeding condition for the first time, AND having a really heavy molt. We struggled with her very sharp and painful biting which we were almost completely unable to dissuade her from and which caused several bruises and even broken skin!

Fortunately I think we are coming out of the woods, after a final sharp escalation.

Shortly after I wrote the initial post in January, Kelly got much worse. She no longer limited her aggression to hands but would unpredictably bite any piece of you she could grab. 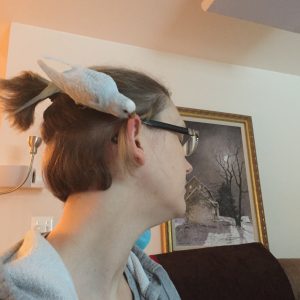 It was becoming difficult to trust her enough to interact with her at all, but at the same time we could tell she wanted to be with us, and would get more upset if we ignored her.

This culminated in a moment where Patrick lost his patience and almost his nose!  He had Kelly out on his hands and was working with her and the clicker, trying to increase the time between landing on his hand and biting it. She was feeling particularly aggressive that day and bit him, latching on very hard.

Patrick made the HUGE mistake of putting his face right up to her and sternly saying “NO”, whereupon she promptly bit his nose, hard enough to draw blood. Patrick put her down immediately and went to the bathroom. I think in that moment it was probably the best way to handle it, he didn’t give her the gratification of a reaction, but he did stop working with her, which may have been her intent in the first place.  Sometimes you just have to do the best you can in these situations.  He cleaned it off a bit and I asked for his permission to take a picture (in case he forgets when he sees this post – he said YES!). 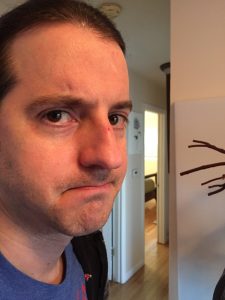 Once he calmed down we talked about what happened and agreed that there was no way to blame Kelly for the nose bite. Patrick reacted in an aggressive way towards Kelly and it was reasonable to expect her to react in kind.

After that we decided to go all the way back to the beginning and treat Kelly like we would treat a new feral parakeet. We limited her interaction with hands and started by placing one hand at a time facing her through the cage bars. She would react aggressively every time by banging her beak against the bars, nodding her head very rapidly and trying to reach through the bars to bite the hand. We would keep the hand still and not move at all until she stopped of acting aggressively and went back to her usual routine.  Doing this a few times a day made a huge difference, in short order we saw a drastic reduction in the amount of time she would spend acting aggressively when presented with a hand.

I also started putting my hand in the cage with millet, the same way I would with an un-tamed parakeet and let both budgies eat millet while perched on my finger. As soon as Kelly started biting I would take away my hand and the millet.

While working on her in-cage we continued to really back off on pushing her outside the cage. We continued to allow her to hang out on us and explore our pockets and t-shirts, but tried to keep our hands out of it completely.

After a few weeks of these tactics combined we have seen a huge improvement.  I know that some of it is because she’s coming out of breeding condition and made it through her uncomfortable molt, but I think the big driving force was finally getting her adjusted to seeing our hands as non-threatening.

Recently she’s been stepping up with minimal biting that’s delivered much more gently.  She’s also stood on my hands a couple of times without biting at all, while I basically held my breath waiting to see what would happen!

She doesn’t see our hands as friendly birds the way that Toby seems to, but I think we are finally over the hump of having her accept that she can’t get rid of our hands, and they are not a threat, and sometimes quite helpful, if not desirable playmates.