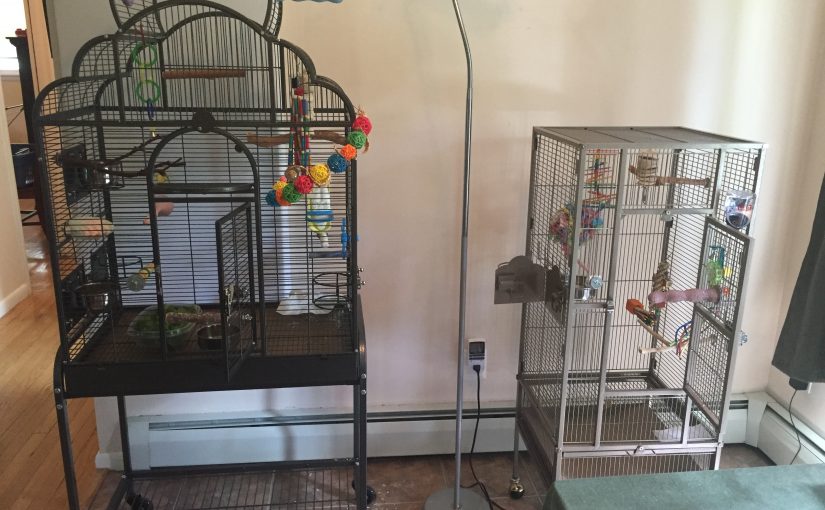 In my post about parakeet girl fights I acknowledged that keeping two territorial females together was taking a risk. At that time, the reward of Kelly and Toby having each other for comfort and company in the same cage was worth the risk of injury from their frequent squabbles over toys and space. Well, my hubris caught up with me on this one and they are currently trying out living solo.

The past few weeks have seen a lot of upheaval for the budgies, I was away on business, and working late hours leading up to that, we made some major changes to the arrangement of our house and then they had to move to my mom’s house for a few days and the travel and change of scenery were very stressful for them.  Additionally, Kelly seems to be getting deeper into breeding condition versus moving out of it, we’ve been missing bed times lately and I’m sure that hasn’t helped.

I should also mention that Patrick and I been extremely stressed out lately, and I firmly believe that they know how we are feeling and it influences their behavior. Whether it’s true they can see our energy or not, or whether they can read facial expressions and body language, I know they are hip to what is going on with their humans.

So, overall they have been ramping up the violence while everything is in chaos around them, and I cannot blame them. I’m typically very rigid about my routine, it’s what makes me happy every day, and they are obviously  used to it as well.

The day before they went to my mom’s Kelly shredded one of Toby’s flight feathers, Toby was defending the porch on their cage and pushing Kelly towards the edge, so Kelly grabbed onto Toby’s feathers to try and pull herself back up. I was there and broke up the fight before major damage was done, but Toby’s feather has a bit of a different shape now.

This all leads up to the final straw fight – I got home from work one day and immediately noticed Kelly’s feathers on the floor. She’s not molting so that was a red flag, and the pattern of the feathers was wrong for that anyway, they were clumped together and as soon as I picked them up I realized they had been pulled out of her. I felt a pit in my stomach as I started examining the cage and the budgies for blood or other signs of damage.

Toby was all clear, but Kelly had dried blood on her foot and a cut. Thankfully it wasn’t actively bleeding so I didn’t have to worry about her bleeding to death, but it came as a sad shock that they had really hurt each other.

I let them out of the cage so that I could try to clean Kelly up a bit and make sure she was really okay, they continued going after each other and fighting, even after they had the entire house at their disposal.

With vacation coming up in just 3 days (thanks for that timing, babies) I knew that they needed to be in separate cages, at least while we were away. There was no way I could trust them to be together 24/7 without someone just coming in once a day to feed and water them. Not to mention how bad I would feel for the pet sitter if she came in to a blood bath and had to deal either with emergency medical needs due to injuries or worst case scenario, a body and a murderer.

Fortunately I had Toby’s old cage in the garage, so I pulled that out and spent the next couple of hours washing it down several times and stocking it with toys and perches. I now have justification for my excessive toy and perch hoard, since I had more than enough on hand to rig out an entire cage!

I moved Kelly into the Prevue Park Plaza

since she had lived in it most recently during her quarantine last summer, but she did not tolerate the space. It’s not ideal for parakeets since it’s an 18” square but quite tall. She must feel very cramped and panicky in there because she just runs back and forth on the bottom looking for a way out.

Almost immediately I knew that wasn’t going to work out, but leaving her there to see if she would mellow out, Patrick and I went off to Petsmart to see if I could find a better option for her. They didn’t have any cages that I liked well enough to invest the money, unfortunately.

feed and I could see on our security camera app that even though it was night time dark, there was a white shape running rapidly along the floor off the cage, so before we even got home I had decided they were just going to have to sleep together that night and I would try Toby in the Prevue Park Plaza the next day.

Once we got home we let them out for a few minutes to try and get Kelly settled down and then moved her back to the big cage with Toby. There was some squabbling before bed, but nothing out of line, thank goodness.

The next morning I lured Toby into the Prevue Park Plaza

and shut her in, crossing my fingers that she wouldn’t start freaking out like Kelly!  She lived in this cage the first 7 months we had her, so there was a good chance she would accept it, even if it wasn’t ideal.

While she seemed confused about what was going on she settled in pretty quickly and I breathed a sigh of relief. Before we go away I still need to make some modifications so they both have enough perches and enough to do, but it is a HUGE relief that I don’t have to worry about them killing each other while we are gone.

As far as a long term plan – once we come back from vacation I want to keep them separated for another week or so until we get back into a routine and everything is finally calmed down and on their schedule. They can still be out for flight time together so that’s a bonus and they will get socialization time then.  Once we feel comfortable we will try having them live together again and see if their time apart hit a reset button, as I’ve read that it can.

If not then they can continue living separately, as much as I don’t want to maintain two cages. Alternately we might consider adding in a male parakeet to try and break up the tension. As much as Toby and Kelly occasionally like each other, Toby more bonded to me at present, and Kelly really hasn’t bonded to anyone. My theory is that if she had a bond with someone it might take her aggression down a notch, but experts can feel free to weigh in and tell me I’m dreaming!

6 thoughts on “The parakeets break up and separate households”