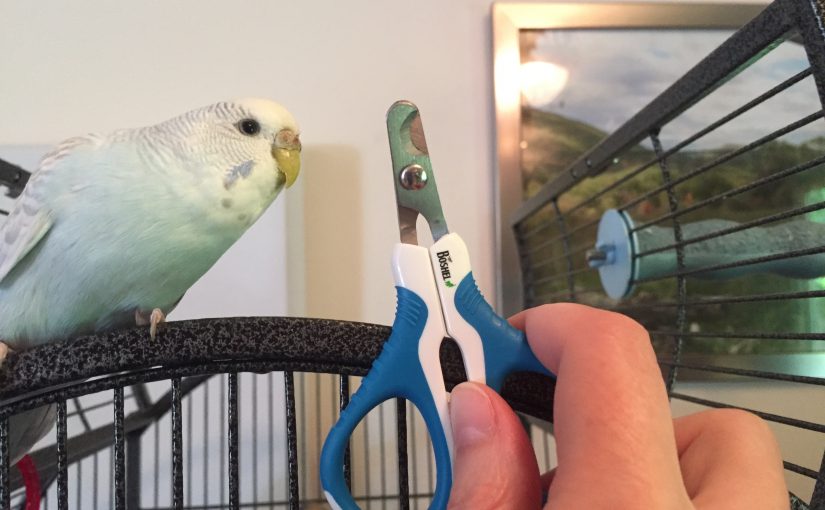 In this household we’ve tended to subscribe to the theory that a parakeet with an adequate variety of properly-surfaced perches should not need any human intervention with keeping their nails trimmed. Recently we’ve taken notice that Toby and Kelly have lost interest in their own nail maintenance, and it might be time to face the specter of clipping a parakeet’s nails.

, they can be used for any small animal , but birds are on the list, and it does seem like it would be easier to clip with that than a traditional human nail clipper.  I also did my due diligence research on how to towel a small bird to keep it still, and to make sure never to cut too high up on the nail because you can hit the blood vessel.  If you do hit the blood vessel you want to have Styptic Powder

or at least Corn Starch

on hand to help stop the bleeding. Parakeets can bleed out pretty quickly, so getting a handle on any bleeding is important.

So, theoretically it seems possible to trim their nails, if not like a great time. Over the past year I’ve gone through phases of trying to get them comfortable with the appearance of the scissors so they aren’t a scary item, and they are always intrigued by them instead of frightened.  This may sound crazy but we’ve also periodically made a big show of clipping our own nails in front of them and filing our nails. The parakeets always get very excited by this process and are eager to jump onto our hands and inspect what we are doing.

Of course this didn’t translate at all to our cutting their nails, and every time we approach them with the nail scissors they act like we have lost our minds. Seriously, they are not even scared they are deeply offended and completely unwilling.

Patrick was very sneaky one day and managed to trim a single nail of Kelly’s by distracting her while she was perching and putting the scissors up behind her. That’s really the sort of trick you only get to use once before they are wise to it!

This past weekend we decided to give it a real try. I got out a cloth napkin and we managed to gently burrito Kelly in it; we did also try for Toby but that was not happening. Although Toby and Kelly like us and consider us part of their flock, they aren’t particularly tame. We don’t really try to teach them any “tricks” and they are not the kind of parakeets to enjoy a snuggle.

At any rate, we had our little Kelly burrito and the nail scissors, but she was wriggling like a fish, her tiny feet were bicycling like mad and to top it all off since we were acting on the spur of the moment, Toby was trying to jump on Kelly’s head to figure out what the heck was going on.

It was a total disaster. There was no way to safely cut anything in the midst of all that ridiculousness and we let Kelly go in short order. I know this is horrid but we haven’t tried again. Thus far they can still walk properly on flat surfaces and they aren’t getting stuck in any toys or on our clothing. We are keeping a close eye on the situation, but I think we’re going to continue with the wait and see, and hope that they pick up the ball again on their own nail maintenance!

One thought on “Clipping a parakeet’s nails – an exercise in futility?”