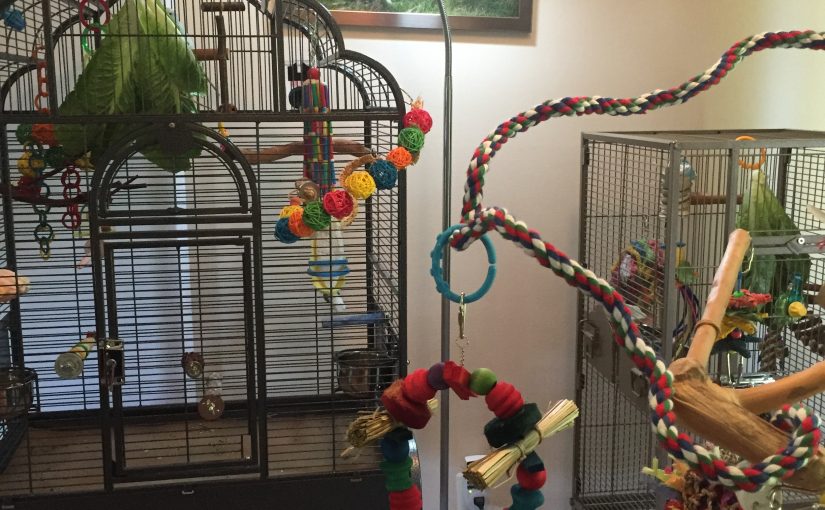 It’s been a while since Toby and Kelly split households and things have been going amazingly well. I hadn’t realized how much stress we were all enduring every day trying to make two territorial female parakeets live together. The constant screeching battles over perch height, food bowls, and everything else in their cage were, in retrospect, absolutely not worth the few moments every day that they would preen each other and be sweet.

The biggest positive change has been in Toby. She has been in a fantastic mood ever since she got her own space back.  She’s back to her old self, wanting scritches through the cage bars and being so excited to greet the day.  Even though she’s still stuck in her Prevue Park Plaza Bird Cage

which is totally the wrong size for a parakeet (being an 18″ square that’s too tall and too low to the ground).  I ordered her a cage to match Kelly’s, the HQ Victorian Top, from Drs Foster & Smith, but it has been back-ordered for ages, and the delivery date keeps getting pushed back.

Fortunately there’s not a lot of urgency about it, she is happy as a clam in her little space, and so glad to move around without someone following her every moment of the day. As soon as they are both out she’ll go hang in the big cage, but we don’t have much trouble getting her back into the Prevue at the end of the day, although it usually involves some Millet

and some Clicker Training

. The bonus on that is that the nightly clicker training is helping her focus, and she’s overall much calmer and very well-behaved. Even though it’s just a few minutes a day, it has a HUGE impact on her demeanor, she’s more willing to sit on a finger or shoulder for a longer amount of time. I suppose part of that could be that she’s becoming a mature lady parakeet, but it really seems more due to both getting a good night’s sleep every night and the clicker training.

Kelly is always a bit of a cranky girl, so she hasn’t changed that much. But, I do know that she’s getting a solid night’s sleep more often.  I am keeping my fingers crossed that we will get her out of breeding condition at some point.

I asked Patrick what he thought the biggest positive change has been for Kelly and he pointed out that she plays a lot more when she’s alone in the cage. When she and Toby were together Kelly would follow her around all the time and ruin both their fun, now that she’s not obsessing over Toby 24/7 she’s got a lot more time to enjoy her toys.

Toby and Kelly are still allowed out together and have fun during those times. They choose to sit near one another and spend some time grooming, but do fight over everything. We can’t leave their food dishes in their cages while they are out or they will both go in one cage and fight over food!  So, both bowls go on top of Toby’s cage and we minimize the battles.

I continue to think that Kelly is missing out on having company, and that if Toby wasn’t such an independent lady they would have been perfectly fine together. So, I’m wearing Patrick down on the idea of introducing a male parakeet who might bond with Kelly and be the best pal she seems to want. Hopefully after his quarantine he would be able to move in with Kelly so I wouldn’t end up having three cages to maintain!  In the interim, I’m glad that having our female parakeets live solo is working out so well for all of us. 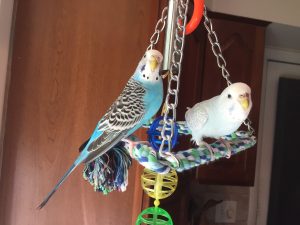