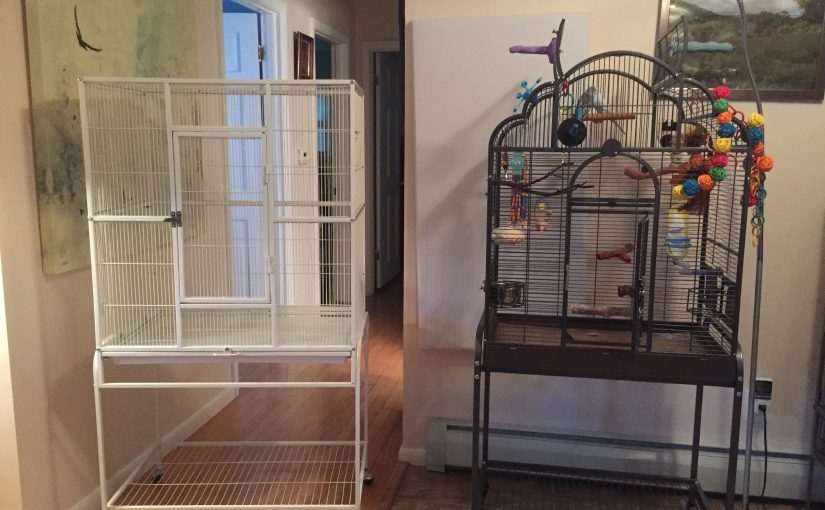 Toby and Kelly have been living single for several weeks now and it’s still going great. They are both getting good rest, individual attention and have enough time to play without someone else bothering or attacking them. I had ordered Toby a new cage from Doctors Foster & Smith a while ago, but it was back-ordered and the fulfillment date just kept getting pushed out further and further. So, I finally decided to cancel the order and get her a traditional flight cage.

At first, we thought we would get another HQ Victorian Top Bird Cage, which has served us well for a long time. I love that it looks like a nice piece of furniture, instead of just a utilitarian bird cage. Also, it’s really solid and not at all flimsy, which is something that bothers me about the Vision Small Bird Cage

that we used for a car ride. I know a lot of people love Vision cages because they contain mess and are easy to clean, but it just doesn’t feel like a permanent bird home to me.

Anyway, it initially seemed like a no-brainer to just buy another HQ Victorian Top and put Toby’s new cage right next to Kelly’s existing. I ordered the cage and didn’t even notice the back-order warning when I checked out (ooops!), so it wasn’t until 5 days later that I started wondering why it hadn’t shipped, and then realized I would still have to wait another month for delivery!

I thought about canceling at that point, but Toby has been such a good sport about living in her old Prevue Park Plaza Bird Cage

it’s really unbelievable. She goes right in at the end of the day and doesn’t even appear bothered that she can’t fly in her home cage. Because she’s being so chill about it I felt like we could wait the month.

Fortunately she’s continued to be a solid citizen about her living arrangement, because once the month passed the fulfillment date jumped again by two weeks! I know this has nothing to do with Doctors Foster & Smith, I’m sure it’s down to manufacturing delays for the cages themselves, but it was sort of a bummer realizing that not only were we delayed again, but I really couldn’t trust the new date either.

We were still pretty set on holding out for the HQ Victorian Top, but I started thinking about how much it would be a bummer to lose out on the flat top of the Prevue Park Plaza Bird Cage

, which I use every day to keep food and water out when Toby and Kelly are out playing. We also put baths up there and toys for them to play with one top of the cage. The Victorian Top cage is really cool for them to hang out on, but it doesn’t have utility space the way the Prevue Park Plaza does.

Since I had all the extra time waiting on the HQ Victorian it allowed me to really second guess the decision, and decide that we would all be better served by getting a good quality flight cage with a flat top.  Enter the Prevue Pet Products Wrought Iron Flight Cage with Stand, Chalk White

, which is made by a company I already trust, and looks like it will be a great home for Toby.

The only thing I’m not thrilled with are the included plastic food and water bowls. I think that plastic bowls tend to get dirtier faster and don’t get as clean as stainless steel. I found these Stainless Steel Hanging Bowls

which solve that issue. I like that they are a two part system so I can hang them wherever and just remove the bowls for filling and cleaning.

Because we have Amazon Prime it should be here in just a couple of days, and I’ll be sure to report on the cage set-up and how Toby likes her new digs.  Hopefully our first traditional flight cage will be a winner!