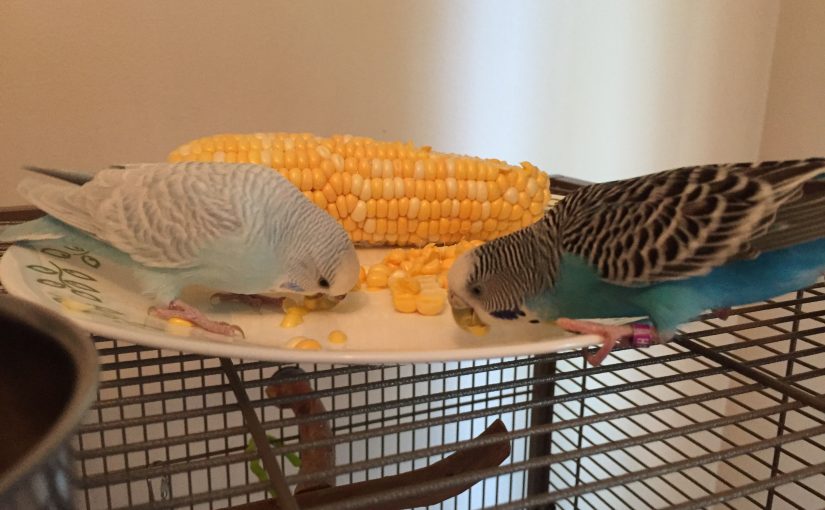 If you’re anything like me, a portion of your time at the grocery store is spent hunting for fruits and vegetables to try feeding your parakeets.  Actually, they’ve probably helped me increase my intake of that portion of the food pyramid, if I’m cutting something up for them I usually make that my afternoon snack as well! A few weeks ago I noticed that ears of corn were on sale at 5 for $1.00 and thought that fresh corn on the cob for parakeets would be both economical and fun.

I’ve tried feeding them frozen corn before that’s been brought up to room temperature and they wanted nothing to do with it, but I know parakeets can be really fussy so I didn’t let that dissuade me from trying fresh.

Preparation is easy, just husk the corn as you usually would, and set aside the interior husks, we will use them for something else.  Once the corn is husked wash it thoroughly and then take a knife to shave off some kernels of corn.  No need to cook the corn at all, raw is perfect. 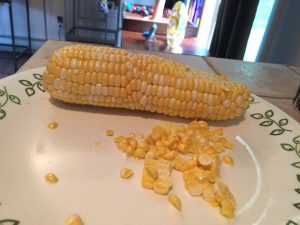 The first time we presented Toby and Kelly with fresh corn they were not quite sure about it and took some time to regard it and discuss. 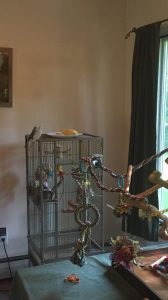 They eventually decided to give it a go and were thrilled with the fun of both eating the corn and throwing the kernels everywhere, of course. 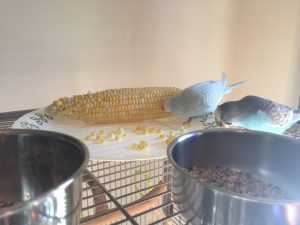 The next week I decided to get them another ear of corn and as soon as they saw the ear they freaked out with excitement and were all over it immediately. I have seen other parakeets eat corn right off the cob, but Toby and Kelly like for it all to be shaved off for them. I don’t mind taking that extra step if it means more of the corn gets eaten. 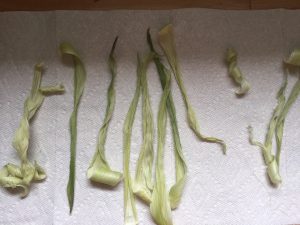 The dried husks can be used shred toys and can be given as they are or tied into other toys or woven etc. I had not originally made the connection, but that’s what one of their favorite toys from Drs. Foster & Smith was made of, the woven corn husk toy.

I offered Kelly a strip to play with on the window perch and she was tentatively very pro-husk, they weren’t quite dried so I’ll have to take some additional pictures after they are destroyed! 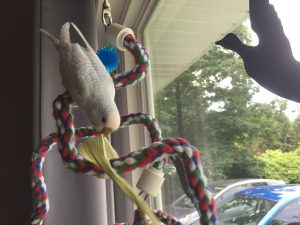 For just 20 cents the parakeets have a great fresh snack, the enrichment of throwing around kernels and digging in them, and then the additional enjoyment of a homemade shred toy.  For a summer time treat, corn on the cob for parakeets really cannot be beat.