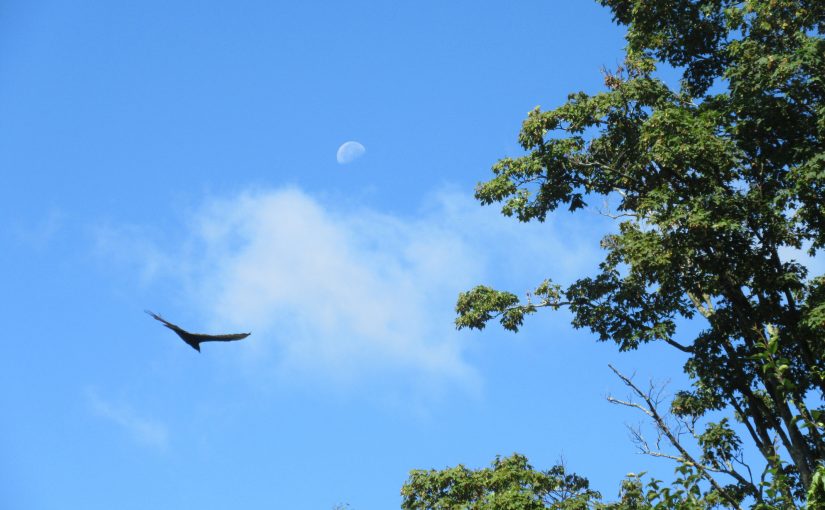 We had some excitement near our house recently, there was some nice fresh roadkill across the street and a wake of vultures showed up to have a feast and party.  Toby’s reaction provided me with a good reminder of why we don’t keep our bird cages next to windows!

Patrick first noticed the vultures on Saturday morning when one swooped low going over our house. First there was just one, but by the time they figured out how to land near the street, there were 6 vultures fighting over whatever poor animal had gotten hit by a car.

Of course as bird lovers we were fascinated! Particularly by how much like a flock of parakeets they were. Just like Toby and Kelly they were always on alert for danger, and they fought over food just like our budgies too. A few vultures were always sitting on top of a tree keeping lookout.

We kept moving from room to room trying to get the best vantage point, and my husband was snapping tons of pictures.

Since it was a Saturday morning Toby and Kelly were out and about doing there own thing, we hadn’t been paying much attention to them, and they really hadn’t paid us much mind either. Then while I was standing next to our big front window Toby came over to see what was going on, and the poor thing froze in terror as soon as she spotted the vultures.

Now mind you, these vultures were not 10-20 feet away, they were all the way across the street and down quite a bit, but she just absolutely went still as a statue frozen in place with her eyes wide wide open.

I tried soothing her with my voice and she didn’t budgie. I even tried getting her to step up by pushing my finger against her tummy and she didn’t move a muscle! I probably could have petted her wherever I wanted and in that moment staying still so the vultures didn’t see her would have remained top priority!  Of course that wouldn’t have been very kind, and instead I immediately closed the curtains and removed, in her mind, the threat of the vultures coming to get her.

As soon as the curtains were shut she was able to move again and went back to her home cage, shaking off the fright quickly.

It made me so glad that our bird cages aren’t next to that big window or any windows with a direct view of the outside world. Even though you might think it’s fun for your parakeets to watch the world go by, and it probably is 90% of the time, the other 10% is full of stuff going by that’s going to scare them. Like vultures, other predators, or even “silly” stuff like a hard wind blowing leaves around.

We humans all know that the flock is safe at home behind glass, but Toby’s reaction to those vultures really drove home for me that the parakeets don’t have that on board assumption of safety, so it’s important that we help them feel safe by using good judgement in cage placement.