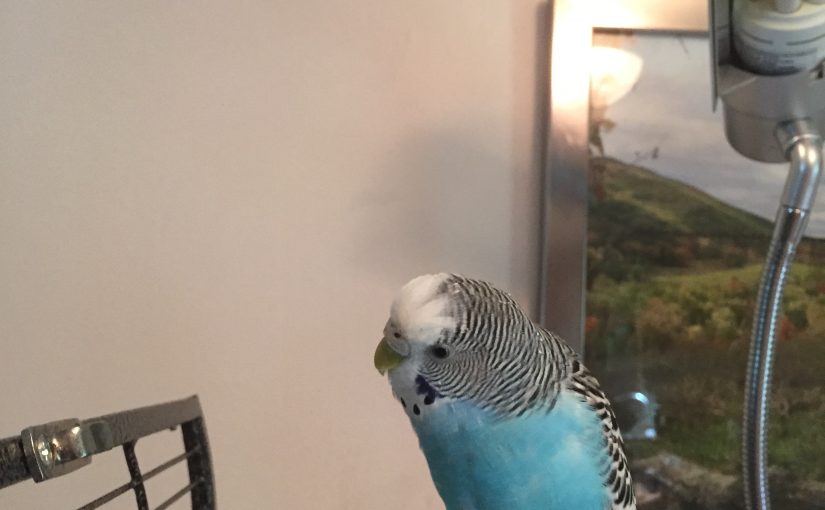 It used to be that molting was a huge deal in our house. Toby and Kelly would behave as though they were on death’s door and it would be days of very dramatic budgie behavior. Sleeping for almost 24 hours straight, being fluffed up, wanting to be snuggled when they usually hate to be touched. It was typically a very uneasy time full of trying to make them more comfortable. But, now that they have both reached maturity, I’ve made some observations about adult molting budgies.

At first it was just Toby who started to handle molting better, although I didn’t notice at the time because I was so focused on Kelly’s discomfort!  Then, once Kelly turned one and a few months her next molt was a relative breeze too.

I mean, they were still cranky and untouchable and even more inclined to bite than usual (Kelly). But, there was no puffing up, no sleeping all day and no cuddling into mamma for some comfort. I might miss that last bit, but otherwise it’s such a relief not to have the vet on speed dial just because we are laid low by pin feathers!

This leads me to believe that once a budgie has gone through a few molts and is a healthy, mature adult they are able to handle the molt a lot better. I have no idea whether it would be because the mature body is heartier or whether it’s just that they aren’t surprised by what’s going on and know that they will make it through okay.

Either way, I’m happy that it’s easier for all of us to get through it with some extra baths, misting and maybe some extra millet to lift the spirits.  This also provides a possible explanation as to why I see so many folks saying that their budgies always go through a molt like it’s no big deal!  I now think there’s a huge difference between juvenile and adult molting budgies.

2 thoughts on “An observation about adult molting budgies”