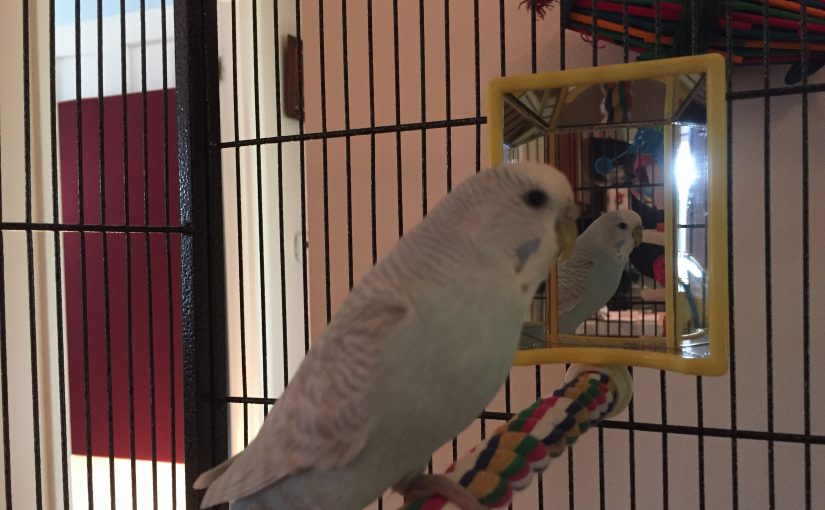 When we first got Toby I was pretty convinced that mirrors in cages were a bad idea. There’s tons of anecdotal evidence that having a mirror in the cage greatly reduces the likelihood that your new parakeet will bond with you. This is because they think the bird in the mirror is a part of their flock, and a non-tame budgie will almost always prefer the company of his own kind. Bonding with a mirror bird can mean the budgie will spend hours a day singing to the mirror, bopping heads, and potentially even attempting to feed the mirror through regurgitation.

This kind of bond can make the budgie unmotivated to ever come out of the cage and interact with you. I mean, why would he want to if his best pal can’t come out too?  It may also make the budgie more territorial and protective of his cage, if he thinks he’s defending another bird. In some extreme cases, attachment to a mirror can result in a budgie getting stuck in a feedback loop. In that instance, since the mirror budgie never breaks the loop of action and reaction, the real budgie can interact with the mirror to the detriment of their own health; potentially resulting in dehydration and starvation. Now, that’s super extreme. I would not expect that to happen to 99% of budgies with mirrors.

But, I would anticipate that the vast majority of solo budgies’ ability to be tamed would be impacted by a mirror friend. When bringing home a new budgie I would recommend leaving mirrored toys off your shopping list.

All of those warnings aside, we did recently get a mirror for Toby

and a mirror for Kelly

as a bit of a trial run. I’ve been feeling increasing bad for Kelly since she and Toby split up, she’s clearly lonely in the cage and I was worried about her becoming depressed about not being able to get to Toby. Since we can’t get a new roommate for Kelly until November due to my travel schedule we talked about it and decided to try adding a mirror so she wouldn’t feel as alone. Toby got one too because that’s how we roll, like giving your kids an even number of presents on the holidays, you can’t do for one without doing for the other!

I’m pleasantly surprised by the experiment so far. Neither parakeet has gotten overly attached to their mirror bird. Kelly spends some time hanging out near hers daily singing to it, but hasn’t gotten too into interacting. Toby plays with the beads on her mirror and occasionally seems interested in what she sees, but typically gets distracted in short order and wanders off to play with something else. There’s been no impact on their readiness to come out of the cage when the doors are opened, which may be because there’s a real bird to come out and play with. Neither bird has gotten more territorial than they already were about their cage either. Although to be fair they are quite territorial anyway!

It eases my mind a bit to know that while we are at work they each have a facsimile of a pal inside the cage with them. I hope that it helps them feel secure and like they are not alone. I still do think that mirrors are not for every bird, and that some may take it much more seriously than ours. If you’ve got a tame budgie that might be a bit lonely while you’re out of the house I don’t see any harm in giving a mirror a try. I would recommend watching closely to make sure it isn’t creating a problem, and be ready to pull the mirror out at the first sign of an issue that would be detrimental either mentally or physically