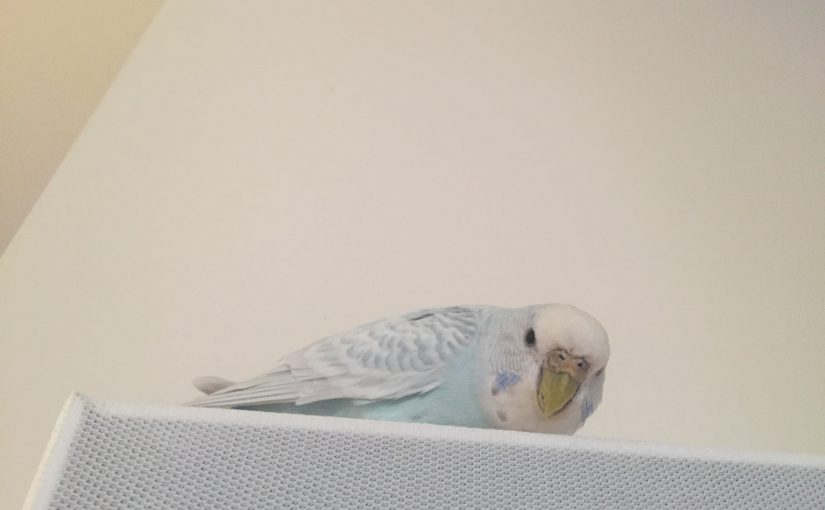 In a recent post about flock favorites I explored Toby’s obsession with her “papa”, who she would like to be with at all times. Things have gotten a little better since then, she’s been much friendlier to me when we’re alone, and even when we’re all together I’m able to get a bit more love. Unfortunately, Kelly increased her obsessive budgie behavior and spent a couple of days “grounded” so we could all take a break. Although, if I’m being honest, it’s just as much Toby’s fault as it is Kelly’s anyway.

Here’s the vicious cycle that we can’t seem to break.

We had a few bad days where some beaks got nicked up and they really could have hurt themselves fighting mid-air and crashing into things. It’s just an untenable situation.

Thinking about it logically, Toby is the problem. She’s the aggressive, territorial, mean girl. But, we can’t ground Toby and let Kelly out in the same space. Kelly is so Toby-obsessed that she will cling to Toby’s cage and let Toby bite her feet. Additionally, and I’m a little ashamed to admit it, Kelly is not a lot of fun to hang out with. She’s not super human-friendly and bites us, she’s only happy if she gets her way precisely. So, if you try to stop her from painfully biting at your freckles she just escalates and bites the sensitive skin near your underarms.

So, Kelly took a break for a couple of days so we could all get some rest. She didn’t take it particularly well and looked very sad trying to break out of her cage and just generally acting miserable. In fact, she was originally going to take a full week break and I’m the one who broke and let her out after a couple of days.  I should add that she has a flight cage all to herself so spending a week in there is not cruel and unusual punishment!

We are getting very close now to adding our boy to the flock and I am keeping my fingers and toes crossed that he and Kelly bond and Toby can just be part of her human flock without feeling like Kelly is always trying to be too close or steal her people. Obsessive budgie behavior is no fun for anyone.  Has anyone else out there dealt with this sort of triangulation?  Is there something else I can do?

2 thoughts on “Kelly gets grounded for obsessive behavior”