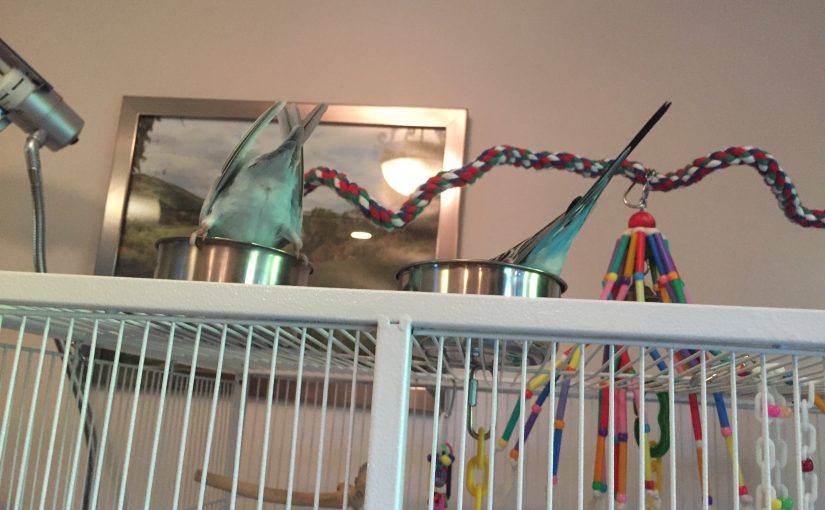 Early November has almost come and gone, and our quarantine cage remains sadly empty. We had hoped to get a third parakeet right after coming back from a short vacation at the end of October. It would have been a perfect time since I’m not traveling for work again until early spring, and typically both our jobs get a little less crazy leading into the holiday season.

The delay has occurred for a couple of reasons. First, Patrick had warned me that early November was going to be madness for him at work. That wouldn’t be a deal breaker ordinarily, but he works from home three days a week. So, having a quarantined bird screaming to Toby and Kelly all day long for 30 days would be a real impediment to good quality conference calls and quiet time to focus!  We are actively monitoring the work situation and will see when a new budgie would fit in okay to disturb Patrick.

On top of Patrick’s work concerns we have now also had a home issue that took our quarantine space out of play. When we left for vacation we had an issue with a slow drain in our kitchen. By the time we came back it turned into a no-drain pipe! The plumber came and cleaned it out, but in doing so broke the pipe further up the line. Not really his fault, they are galvanized steel pipes that were original to the house (1954) so we are lucky we got that much time out of it!

Where this impacts the parakeets is that when the plumber is working in the kitchen making a variety of horrible noises and potentially chemical related smells they can’t be out there getting freaked out and poisoned!  So, they have been spending those days in what would be the quarantine room.  Thank goodness I didn’t get home from vacation and immediately rush out to get my new baby, I have no idea what we would do to try and get some separate air space.

There is still some work going on this week to replace a bunch of pipes, but hopefully by the end of November I will have my new budgie. In the interim I’ve been using this time to order him a few things that will make his quarantine more pleasant, like his own Echo Dot

so he can listen to music, as well as a set of night lights

and a small lamp

At this point I would love to get the new baby no later than Thanksgiving week so that he’ll be able to spend Christmas with the flock, but I guess we will see how long Patrick’s work trauma and our plumbing issues play out. It stinks having to be responsible when I would much prefer immediate gratification, but I know that we have a much better change of safe and successful integration of a new parakeet if I exercise patience and restraint!