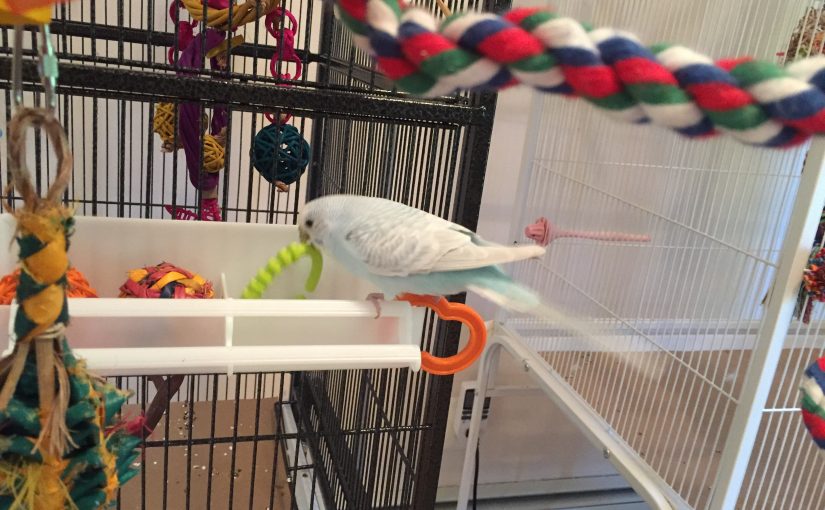 it came with a set of plastic trough style Feeder Cups

, which I knew immediately I wasn’t going to use. Not only do plastic feeders encourage bacteria growth, but they were also difficult to get in and out of the cage. In fact, I’m not sure how you would keep water clean in them at all without quite a bit of difficulty. So, I bought a set of my preferred Stainless Steel Hanging Bowls

, put away the plastic tray feeders and didn’t think about them again for a few months.

Fast forward to Patrick and I cleaning out the parakeets’ toy and perch cupboard. It’s terrible, like a totally embarrassing toy hoard, someday I’ll post a picture! Anyway, every so often we go through and toss out stuff that got put away but most likely the birds wouldn’t really use, or toys that are fairly beat up.

He noticed the food trays and decided to try hanging one off the outside of Kelly’s cage and then put a bunch of little toys in it for her to throw out. What’s in there are some pieces that came off old toys, like a vine star from a Christmas toy, a large wooden bead, etc. But also, some Baby Links

. All together it’s a bunch of little items with different shapes, sizes and textures as well as varying degrees of difficulty to pick up and throw.

Kelly typically has a short attention span and doesn’t play with toys much. But, she will happily spend time picking up and throwing out every single one of the items, and then when you load it back up she’ll do it all over again. She’s our obsessive biter, so anything that keeps her occupied and relatively happy is a major win for us!

Even if your parakeets don’t need something to obsess over, the little trough of foot toys would be fun for even the most well-adjusted parakeet. Who hasn’t seen their parakeet drop a feather or piece of food and then watch with intensity as it falls to the ground? Sure, it can get a little tedious picking everything back up and resetting, but it’s totally worth it in the name of parakeet fun and enrichment!