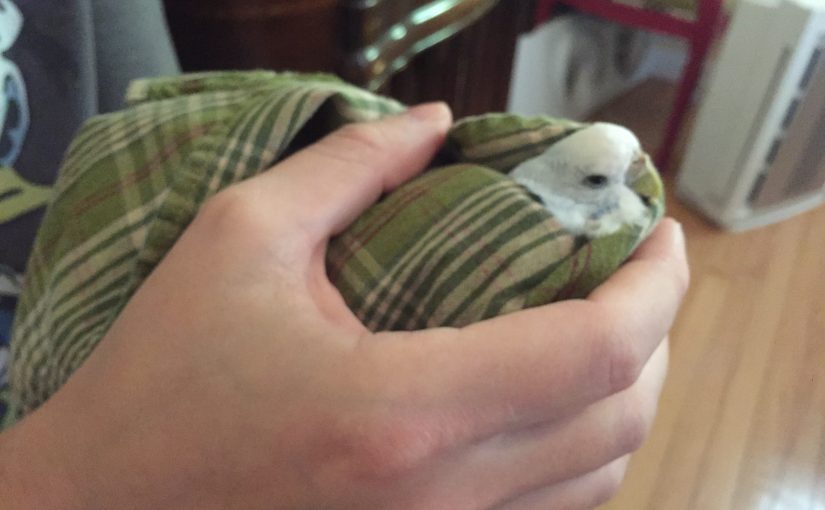 Toby and Kelly are not necessarily what I would consider to be tame. They like their human flock and are happy to come hang out with us if we’re doing something interesting. But, we’ve never really put a ton of effort into training them to do specific things. They are pretty much entirely at their leisure to come and go as they please if we’re home and not cooking. The one exception would be training them to go back in their cage, which we have put some work into and it goes okay for the most part. When it’s parakeet pedicure time, though, we have zero procedures for getting them calmed down enough for a nail trimming.

By the way, yes I have seen videos of people with their parakeets chilling out on their shoulders, clipping a nail one by one almost without that parakeet’s notice. I don’t know what magic those people have, because Toby and Kelly are way too crafty and security-conscious for that kind of sneak attack! Instead, we end up trying to lure them onto a clean cloth napkin so they can be wrapped up like a burrito and spirited away to a quiet room. 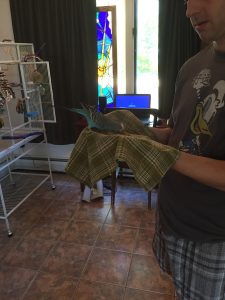 We were originally shooting for Toby this time, but it was not happening. As soon as Patrick’s hands start moving she is wise to the trap and flies off to laugh at us.

He did manage to nab Kelly and we took her off to be “tortured” This involves covering her whole upper body including her head and just letting her feet free. Then trying to grab the tiny bicycling tootsie and clip one tiny nail on one tiny toe. Totally ridiculous prospect. When you could easily clip off an entire toe it really ramps up the danger quotient.

Patrick managed to get two or three of the longest nails on each foot and then we released Kelly back into the wilds of the home. We were all feeling quite battered from the experience. Kelly showed off her angry wings for a bit but calmed down and was given lots of Millet

With that done the humans gave up and had a stiff drink, and Toby sharpened her nails while chuckling gleefully at our failure!

3 thoughts on “Parakeet pedicure time: Kelly gets her nails trimmed”