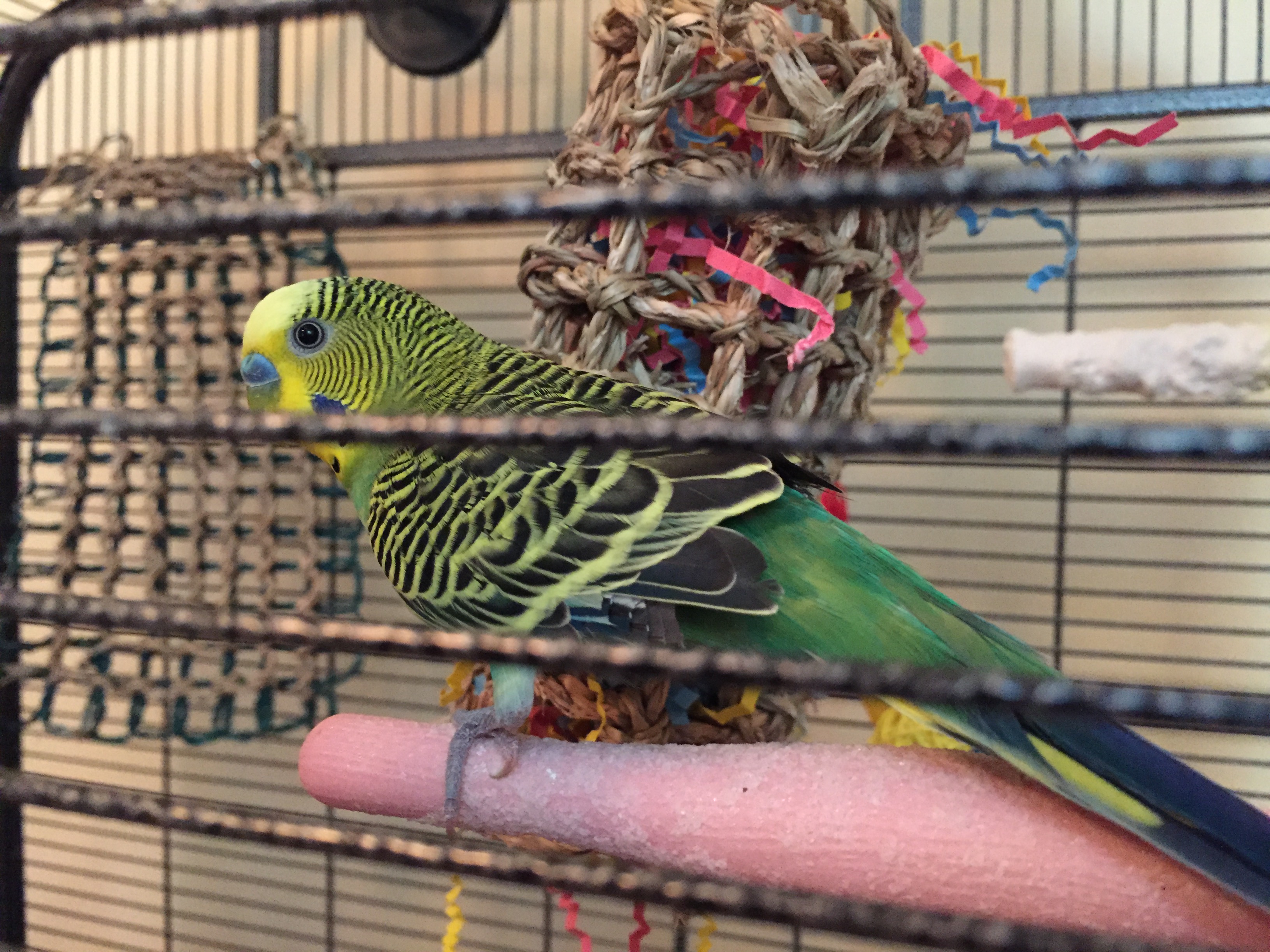 We did it! This past Saturday, after much hemming and hawing (Patrick) and excessive preparation (me) we went to Benson’s and picked out our third parakeet and first boy budgie. His name is Kevin to fit in with the rest of our Office-inspired

flock names. He’s definitely a mature gentleman. We didn’t ask at the store how long he’d been there, but based on his visible irises and lack of baby bars he is at least one year old. That’s totally a minimum, comparing his eyes to Toby’s I think there’s a good chance he is two plus.

I had received a recommendation from a reader to get a mature fellow who would be able to stand his ground against my dominant ladies. When we arrived at the pet store Saturday morning we found they only had four males available in their entire parakeet aviary. Two of them were under a year old and there was one gent even older than Kevin. We must have watched them all for at least an hour and what we saw of Kevin’s behavior and health looked very good. We were able to watch him eat and drink and forage around on the floor. He would frequently perch by himself, but if he was joined by other parakeets he was happy to chat to them and be part of the group. His eyes are bright and clear and his nares are free of any obstructions or anything that would make me concerned about respiratory infection. His feet look a tiny bit dry but there’s no sign of mites on either his feet or his cere. Although we couldn’t quite hear him we could see that he was singing his heart out, which is something we are sorely missing in our flock of screeching ladies!

Before we left the shop they had us sign a form indicating that if we weren’t able to care for Kevin they would take him back at any time. Every employee we spoke to also took care to ask us if we were familiar with caring for parakeets and had everything we needed for Kevin at home. I thought that was a really nice touch and showed me that they care about animals. They also clipped Kevin before we took him home. I know, I am an incredibly staunch opponent of clipped parakeets in your home. But, it made me feel more secure transporting him and I feel like it will give us a leg up in taming him during his quarantine. Also – they did a super tasteful job, not as severe or debilitating as Kelly’s clip was.

Arriving home we transferred Kevin from his cardboard box to his quarantine cage. Even though I have written a whole lengthy post about what to expect when you first bring home your parakeet it has still been a horrible couple of days feeling bad for Kevin! He is obviously terrified and didn’t move for many hours after coming home. We weren’t even sure he had eaten until 22 hours in, which was nerve-wracking. Again, even though I KNEW exactly what would happen, it still felt awful seeing him so scared.

I put our “Nanny Cam”

trained on his cage and I’ve been peeking at him every so often during the work day. It really makes me sad seeing him just sit in one spot for hours, but I know that he will eventually understand that his new cage is a safe space. He can hear Toby and Kelly and they are definitely freaking him out a bit too.  They are totally unaware that he’s in the house, since he hasn’t made a peep yet. Occasionally they hear a bell ring and get a bit curious, but until he starts vocalizing they should be blissfully ignorant!

One thing about quarantine has been much harder than expected, and that’s the way shutting the quarantine room door has messed up our heat. Now the quarantine room gets stifling warm, and the rest of the house is much chillier. So, we’ve had to resort to leaving the door cracked open a bit when the girls are safely stowed away. I know it totally violates the separate air space tenet of quarantine, but I couldn’t very well freeze Toby and Kelly for 30 days!  As it is, Kevin has the K&H Snuggle Up Bird Warmer

, Kelly had been acting chilly over the weekend so now she has the K&H Thermo-Perch

. Toby appears to be totally fine with the temperature but we’re keeping an eye on her.

Bringing home Kevin has been so different already, I hate that he’s tucked away and can’t ease into the rhythm of the household. We’re making a big effort to sit with him, but it’s not the same as his being able to observe us all the time and see that we are not threatening. He seems like he will do okay ultimately. He does show some fear when we put our hands in the cage to change water or food, but he doesn’t flap around like crazy or totally lose his mind.

He seems tentatively curious about his surrounds outside the cage. You can see his head swiveling around when he hears noises to try and figure out what the heck is going on. He has been eating regularly since his 22 hour hunger strike and his poops look great. Kevin has not shown any interest in playing with the toys in his cage, but I don’t think he was exposed to toys so we will have to show him how to play down the road. Failing that, I’m sure he’ll pick it up from Toby and Kelly!

I don’t want to squander these 30 days and I want to make a big effort towards bonding with him. On the other hand, I’m a total softy and I know that he would feel so much safer and more comfortable if he was interacting with Toby and Kelly. Overall it’s exciting but also so weird, until he starts making some noise it’s very easy to forget the is there at all, it’s almost like we still just have two parakeets. I can’t wait until he’s as noisy and demanding as the rest of my budgies. Seeing the difference between Kevin and Toby/Kelly makes me regret ever saying that the two of them aren’t very tame. They aren’t trained to do much, certainly, but compared to someone straight from the pet store they are entirely tame.

2 thoughts on “Introducing Kevin – our third parakeet and first boy!”