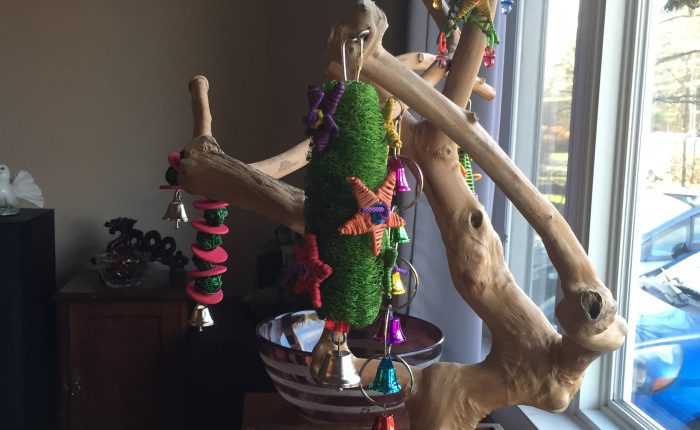 Toby and Kelly have been working feverishly on their Christmas wish list for parakeet-Santa.  They are cutting it a little close to the wire, but here’s their parakeet gift list full of their secret and most closely held desires!

Toby really wants to try having Nutriberries as a treat! She has heard that if I crumble them up for her she will be in a heretofore unknown ecstasy of foraging.

Kelly’s wants are a bit more basic. She plows through a cuttlebone every week, so she would like a never-ending supply of essential calcium as well as beak-exercising destruction.

Kelly snuck in a second want in a row! She loves the smaller version of this toy so much that she wants to try out the one for big birds! Since the single cupcake style is destroyed in a single day, we’re hoping that Santa brings one that lasts for three days!

Both Toby and Kelly are dreaming of a new play gym. They acknowledge that they previously had a very similar gym and totally ignored it, but they feel that since they both have flat top flight cages now they will get a lot more use of out of a play gym if it’s on top of the cage.

You’re probably wondering what poor new kid Kevin would like for Christmas. He’s just dreaming of getting out of quarantine and spending some time with his “sisters”.

He has been using the java tree as his personal play stand, so we all hope he comes out of quarantine in time for us to use his play tree as our Christmas tree like we did last year!

Speaking of which, Santa better bring us some new Christmas-themed bird toys to load up our “tree”.  Seems like some human “Santas” may need to start adding things to their carts before we run out of time!  I hope everybirdy out there finds exactly what they most want and need under their trees this year!