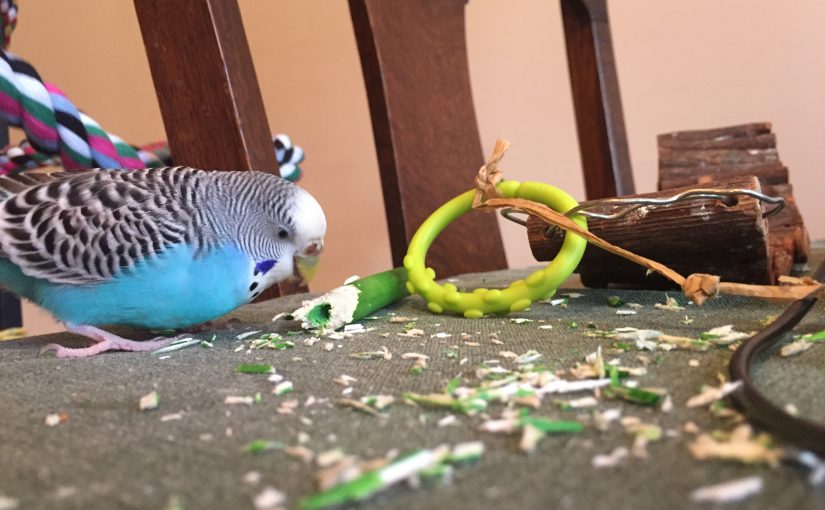 My husband had his tonsils out last Tuesday. Tonsillectomy is pretty regularly done on little kids, who, I presume, heal more quickly or otherwise just take it better. Anyway, leading up to the surgery everyone we told was basically like “this is going to be the worst thing you’ve ever experienced in your life”. Or would tell us an awesome horror story about rupturing or death. As we came up on the surgery date I worried about Patrick having a horrible recovery, but also increasingly about how the whole budgies with sick humans thing would pan out.

With the exception of Kevin, who’s still quite shy with us, the rest of the flock can be extremely in your face. Toby especially with Patrick, and particularly in springtime! I knew that if they bothered Patrick while he was recovering they would be stuck in their cages, but I hate doing that. Since I was working from home the days after his surgery it seemed particularly unfair to keep them cooped up all day.

The afternoon we got home from his procedure we installed Patrick on the reclining couch and I decided to try letting the budgies out. Honestly I was feeling a bit scared and stressed, and wanted some cheering up and company.

Before I let them out I asked them all to calm down and I gave them a talking to. This will sound a bit silly, but making eye contact with all of them I said, “Your papa doesn’t feel good, and I need you to leave him alone. Don’t look at him, don’t jump on his head and don’t scream in his ears, go it?” I repeated the messaging a few times and…

They have left Patrick completely alone. Toby has landed on his head twice in the last several days and has not screamed in his ears at all. I’ve given them the same talk every day before letting them out.

Now, am I sitting here trying to tell you that my parakeets understand English?  No, definitely not.

I think it’s a combination of things. One is that it’s extremely unusual for me to make them settle down before they get out of their cages, so they may have been tipped off immediately that something was different. Also, I call my husband Papa to them all the time, and since budgies do have a concept of naming they may actually connect the dots on “papa” being a person.

More than that though, I think it’s down to their sensitivity to what’s going on with their flock, which includes humans. I think it could also be related to their super awesome sight, which may give them an enhanced ability to see that Patrick is in pain.

No matter how they managed to behave so responsibly, I appreciate it beyond words. Their company has been such a major source of comfort to me while Patrick has been recovering that I would have been much worse off it they ended up getting grounded!