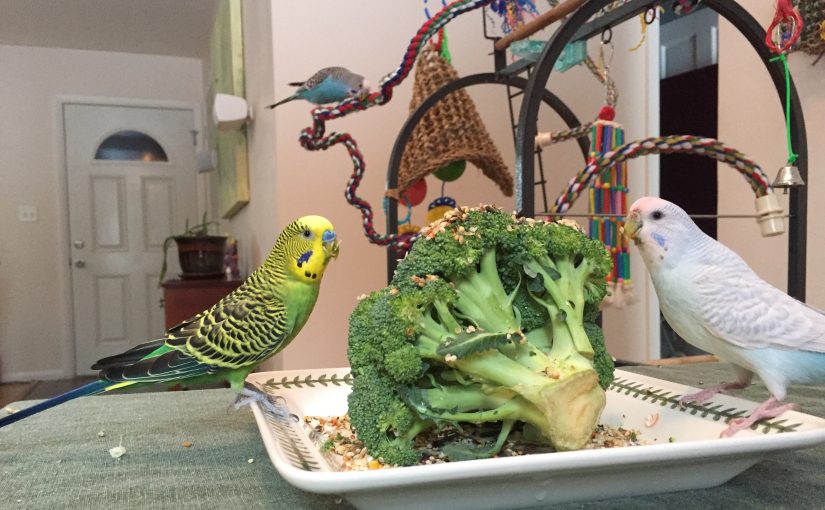 After a one year delay, I’m sure that even our semi-faithful readers must have thought that some tragedy befell the flock. Fear not for the lives of our intrepid budgies, it’s merely my laziness that has kept me from posting.

To be honest not much has changed since I wrote Kelly’s two year post, except for the fact that she’s three! Toby, Kelly and Kevin have not been joined by any additional budgies, and they are still enjoying their privacy with a room of their own. Regardless, I thought a good post to start writing again would be a general update of how everyone’s doing.

Toby will be four in October and although she’s still quite sassy and feisty I do think there’s an air of maturity about her. Although she remained close to her human flock after we got Kelly, it’s been a bit different since Kevin assimilated. She and Kevin live together and I sometimes refer to Kevin as Toby’s support animal. He takes very good care of her and always looks out for her well-being. As a consequence she really doesn’t need us that much for social interaction anymore. Toby enjoys fresh corn and millet and is still the quietest of the bunch.

Kelly is our resident crab. I frequently feel like she wants to be friends with everyone but just can’t figure out how to stop being so aggressive. She has her moments, of course, but mostly spends her free time starting trouble with other birds, humans, or biting her cage bars. We do everything we can to make her happy and give her lots of toys to destroy, but most of the time she’s pretty cranky. We can’t seem to snap her out of breeding condition, although she’s never laid an egg, so I think that’s part of the issue with her attitude. Kelly’s favorites include shredding toys and watching videos of parrots on YouTube.

Kevin is a total sweetheart to Toby and alternately aggressive and amorous with Kelly. He would be willing to shack up with either lady, but they aren’t that interested in his advances. He has pressed his suit successfully on a couple of occasions with both of them, but no permanent romantic bonds have been established and he hasn’t made any babies. I think recently he’s given up a bit on the wooing and settled in to playing, yelling, and tons of singing. He’s not particularly interested in human interaction, but will occasionally acquiesce and chew on my glasses or groom my eyebrows. When he does it’s clear he’s doing it to be a good sport, but he’d rather be elsewhere.

Kevin wants everyone to get along and be happy, and he’ll nip any budgie who steps out of line, assuming it’s Kelly. Toby could probably stand on his head pecking and he’d put up with it and say, “whatever you want, boss”. Kevin loves chewing on lava rocks and he adores singing along to whatever we play on our Amazon Echo, but his number one, all-time favorite, passionate sing-along song is Let It Go from the Frozen soundtrack.

Not much changes day-to-day or even month-to month-now, and although we do variations on enrichments and try to play together every day, humans are a much tougher sell with all the budgie entertainments on deck. I’m going to try to get back into the habit of posting at least once a month, but we’ll see! At any rate, I did want to make sure to let readers know that the flock is still going strong!