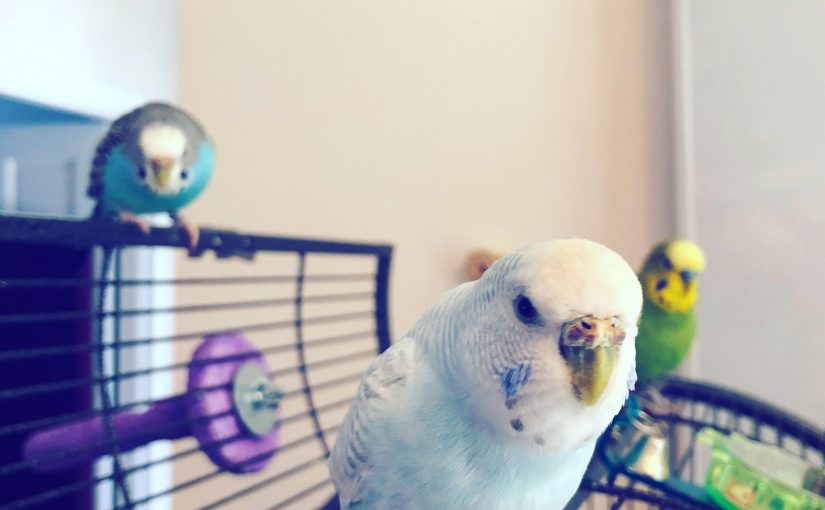 A couple of years ago we decided to move the parakeets’ cages into what is intended to be the master bedroom in our house. We decided to change our budgie cage placement for a couple of primary reasons.

The first was that our oldest girl, Toby, had become really fixated on my husband. She was territorial about him and loved nothing more than to sit on his shoulder, scream in his ear and fight anyone who came near him. The second was that our “middle child”, Kelly, had developed a habit of chewing her cage bars and making a horrific clanging noise. We were working on redirection, but honestly given the two lady budgies’ issues it seemed like a good time to take a break and hopefully hit reset on some behaviors.

We lasted a bit over a year and now the budgies are all back in the dining area between our kitchen and living room. Our house has an open floor plan so they are in the middle of the action with a good view on all human activity except work and sleep time.

Here are my pros and cons for budgies having a separate room.

Although almost any of the cons would have been enough to convince me to put our budgies back in a common area it’s the last one that really did it. It was so sad not having them as a major part of our daily lives and I think we’ve all been happier now that they are part of all the action again. So, my final recommendation on budgie cage placement is in the middle of the action 100 percent! Even though it takes more care not to open doors and increased safety in the kitchen it is absolutely worth it to feel like we are all part of one flock.

4 thoughts on “Budgie cage placement – separate room or middle of the action?”