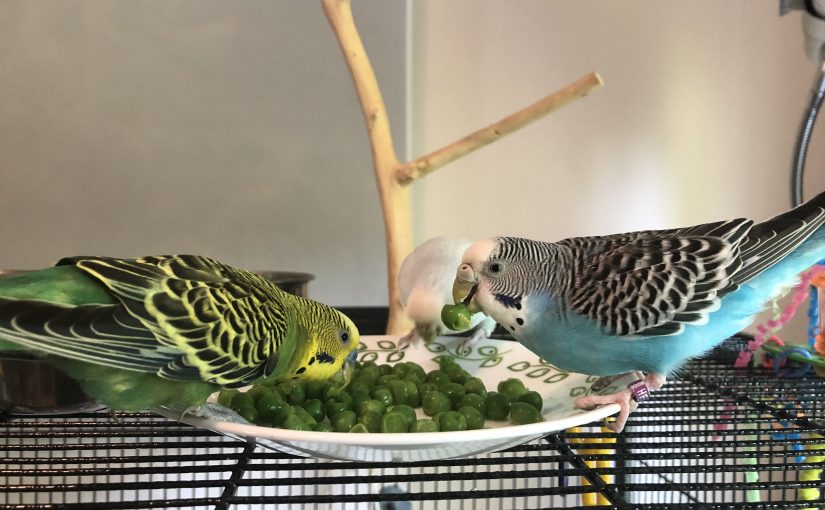 Parakeets and human hands, or rather the parakeet’s relationship with human hands, is a fascinating and varied topic. We have three budgies, and each of them have wildly different personalities. I’ve been thinking about that  lately, and how their personalities are reflected in their behavior around our hands.

Toby is our first parakeet, and was an only bird for almost a year before we brought home her “sister” Kelly. We lavished Toby with attention and spent a ton of time training (or attempting to train) her on things like flying to us from anywhere in the house and on basics like stepping up on our fingers.

Given that history, you’d think Toby’s relationship to our hands would be pretty straightforward, but it’s actually quite complex. She seems to regard our hands as birds, so, when she the mood strikes she likes to interact with our fingernails as though they are playmates. She will pin her eyes and tap her beak against a human fingernail and reacts to it exactly as though she’s playing with anther bird.

Maybe because of her belief that our fingers are birds, what she won’t do reliably is step up onto a finger as though it’s a perch. In fact she seems quite offended by the idea if you ask her to step up! She will do almost anything to avoid hopping onto our hands, maybe because she wouldn’t naturally step on another budgie?

Regardless, unless she’s quite distracted or tricked with millet

, she wants nothing to do with our hands at all unless they are being her bird friends.

Kelly is a different matter entirely when it comes to hands. We brought her home from a parrot shop where as a baby she was hand fed and handled frequently by her breeders. Because of her upbringing we had a misguided assumption that she would be totally cool with hands and very easy to work with.

She was accepting of stepping up when she was a juvenile, but as soon as she starting moving towards adulthood she decided it just wasn’t working for her. Unlike Toby, however, she doesn’t see our hands as birds at all. As best as we can figure, she things of our fingers as wooden perches

. At least that’s a logical explanation for why she bites us so hard! Much harder than she bites the rest of the flock, unless she’s very angry at them, or certainly everyone would be dead from blood loss.

Kelly will, however, take help from a hand without biting if she needs it. For example, if she ends up on the floor and feels confused, then she will look around for us to help her out. Maybe she thinks of that as her human flock coming with their weird wooden perches to get her out of trouble? I have no earthly idea, but it’s very much at her discretion.

After working with her extensively to try and reduce her biting we have essentially accepted that it’s just not going to work out between her and our hands! She’s a great companion and a lot of fun otherwise, and it’s rare that we need to risk injury to enjoy her company at this point.

Kevin came third, and for no reason whatsoever has the ideal relationship with our hands. As frequent readers know, Kevin was completely miserable in quarantine, wanted nothing to do with humans, and only started acting remotely budgie-ish once he was with Toby and Kelly.

The moment he met them his relief was palpable, and even though they immediately started plotting to kill him he was overjoyed. So, to be honest, although we’ve intermittently worked with Kevin since on taming and training, it’s been spotty at best and we largely accepted that he was a “bird’s bird”.

Which is why it makes no sense at all, but he’s amazing with our hands. He always steps up when asked and will let us put him wherever we want. He will sit on a finger for longer than either of the girls and seems really comfortable. He’s the only one who’s ever sat on my finger and preened himself for a moment or two.

Moreover, he actively looks to us and our hands for help and sees hands as a solution rather than a problem. If he wants to get from point A. to point B. and we offer a hand he will take it 100% of the time.

He doesn’t see our hands as birds, or as wood to be chewed, but as helpful tools. He likes to beak at our fingers in an exploratory way, and will agreeably endure, but does NOT enjoy, an occasional gentle head or chin rub.

As I write this it becomes even more clear to me how their personalities are reflected in their actions towards our hands; Toby’s desire for connection and attention, Kelly’s single-mindedness, and Kevin’s gentle affability. I feel, essentially, that although I could have done more to train each of them, the results would always be strongly driven by their personalities.

A very common question for a new parakeet owner to ask is, “when will my parakeet let me hold him/pet him/snuggle him, etc. Without being a Debbie Downer, I always want to answer, “probably never”. But that’s the truth, with taking on budgie parenthood you’re spinning the wheel of chance and there is no guarantee that you’ll have a budgie that will EVER want anything to do with you touching them. In fact, I’d even venture that it’s more likely they won’t.

One of the great things about parakeets is their huge variation in individual personalities and the multitude of ways that you can have positive interactions with them that don’t involve petting. Although our parakeets and human hands interactions may not always be ideal, and are occasionally quite painful, I wouldn’t trade these cool little people for anything more predictable or more snuggly!

Disclaimer time: Home Keet Home is a participant in the Amazon Services LLC Associates Program, an affiliate advertising program designed to provide a means for sites to earn advertising fees by advertising and linking to www.amazon.com. As an Amazon Associate I earn a small commission from qualifying purchases readers make after clicking links on this site.

One thought on “Parakeets and human hands – how our flock reacts”