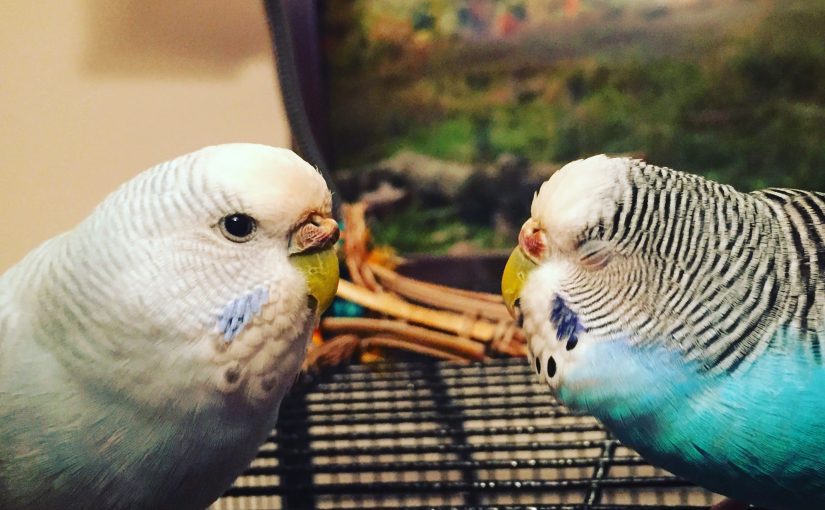 I realized recently that I never provided an update on Kelly’s hand-aggressive behavior.  In my last post on the subject, Hide your hands – Kelly is a teenager I ended on a somewhat hopeful or positive note, assuming there was a solution to this issue. I can now report I have not found the method to solve a biting parakeet.

Many people will tell you that A. budgies only bite when they are scared, and B. the bite of a budgie does not hurt. I am here to tell you that these statements are not absolutes. Kelly is not scared of us, and Kelly bites hard enough to cause pain, bruising and broken skin. She bites completely unprovoked, choosing to land on your hand and then biting incredibly hard.

I have tried the following conventional attempts to discourage biting with zero impact:

I should add that the aggression is not limited to hands, she will land on your shoulder and bite your neck. She loves climbing in and out of shirt collars but we can’t let her do it anymore because she bites your chest and neck too much to bear it. This isn’t even aggressive initially, but if you try to redirect her she gets angry and bites harder.

I’m sure some of this is impacted by the fact that she’s in breeding condition, but it’s been an issue all along. She also has AMPLE appropriate toys and perches to destroy in her cage, which she enjoys.

Ultimately our solution has ben to take a hands off approach with Kelly. It stinks because I feel like we don’t have much of a relationship with her, but interacting  with us does not make her happy. Not that much does, she is just generally a real crab. If she had been our first bird I’m sure I would have quickly concluded that parakeets were difficult and violent pets!

I wanted to write this post for a couple of reasons, firstly so I don’t give the wrong impression that I managed to resolve this issue. But, more importantly, I want you to know that if you’re struggling with an aggressive budgie and people keep telling you that budgies aren’t aggressive you are not alone!  There are other angry parakeets out there biting their human flock for no reason who cannot be stopped.

If I do manage to reduce the aggression I’ll report back, but other wise it’s safe to assume that Kelly’s human flock is walking around with a few bites at all times! I should add that she has never harmed another parakeet. When she is  aggressive towards Kevin she focuses on trying to pull out his feathers. I’m not a fan of that behavior either, but if it was more serious I would think about separating her or even rehoming to an environment she might enjoy more. What that would be I have no idea!