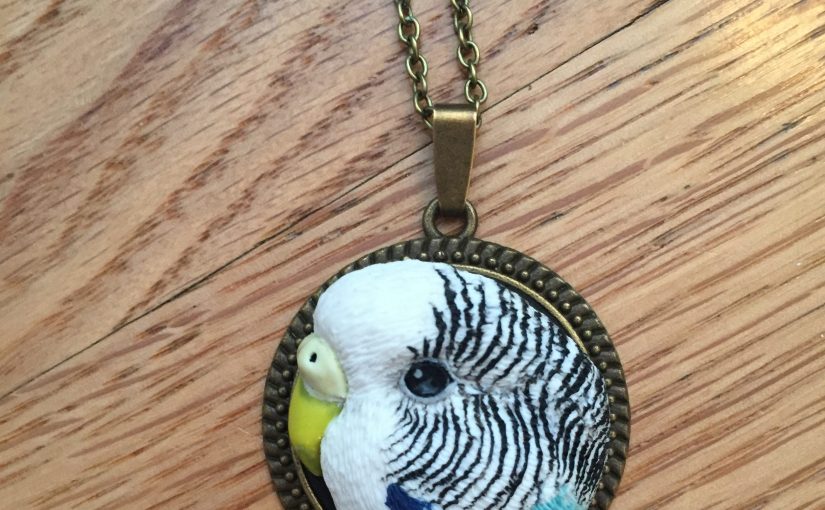 The holidays can be a relatively hectic time of year, it’s always fun, but there are lots of folks to visit and celebrate with. Patrick and I decided a few years back that we would pick a day after Christmas and use that as our Christmas Day for our own traditions and gift exchange. That way we wouldn’t miss out on any of the extended family fun, but we could still have a day that felt special to us. He really knocked it out of the park this year and I received a number of awesome budgie gifts!

We also don’t buy a traditional Christmas tree, both for parakeet and human-based reasons. With the parakeets I worry that buying a non-organic tree could put them at risk of ingesting pesticides and other chemicals if they landed on the tree. As far as fake trees go, I would fret about them chewing on the needles and eating plastic. I’ve never pretended to be blasé about life, so this tree-related angst probably comes as no surprise to anyone! In addition to my parakeet/tree issues, my husband also has a bunch of allergies and chemical sensitivities that make either kind of tree a challenge to his well being. So, several years ago we ditched the concept of traditional trees and have either used a Java Tree for the birds with holiday-themed ornaments, or Patrick builds a tree out of cardboard and it’s a temporary affair.

This year was a build year – he used cardboard, tissue paper, tiny fake tea light candles and here’s the result. 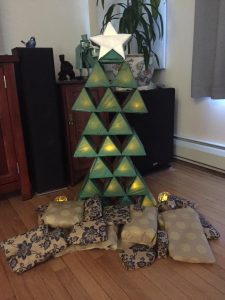 It is very beautiful with the lights flickering, there’s even one in the star.  And the birds totally ignore it because it’s relatively short and not in one of their flight paths.

On to the budgie gifts!  It’s probably poor form to “brag” about the things I got for Christmas, but I feel like other parakeet lovers will want to know these things exist!

This tank is the cutest thing! It would be a great workout tank or just lounging around the house in summer.  Patrick wanted to find one with a parakeet that looked like Kelly, since she’s our big girl, but she’s not a very common color. 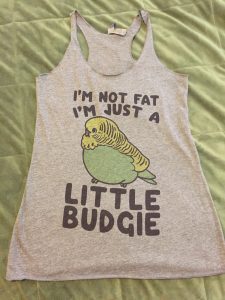 Usually I’m not a huge fan of these figurines, but it’s a girl with three birds! So cute! Patrick even took some crayons and colored the birds to resemble Toby, Kelly and Kevin. I mean, come on, how sweet is that? 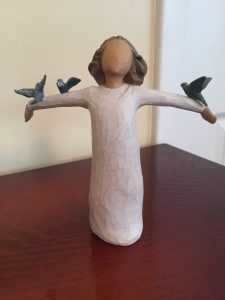 The real star of the Christmas show, however, was this custom necklace he had made to look like Toby. 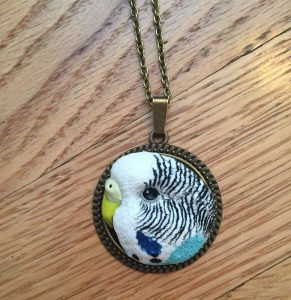 It looks exactly like her!  Down to the expression in her eyes. Patrick said he provided the shop owner with three pictures of Toby to start and then they refined from a proof after that. The shop owner was incredibly responsive and polite, even when he made multiple changes and asked that she rush the order for Christmas delivery.

The shop name on Etsy is NicomadeMe and based on Patrick’s experience and the finished product I wouldn’t hesitate to recommend her! It’s not often that a gift makes me teary-eyed, but this one did that quite spectacularly.

Did you receive any fabulous budgie-related gifts this holiday season?  Let me know so I can build by wish list for next year!  I hope everyone had a safe and warm holiday full of love and feathers – happy new year all!