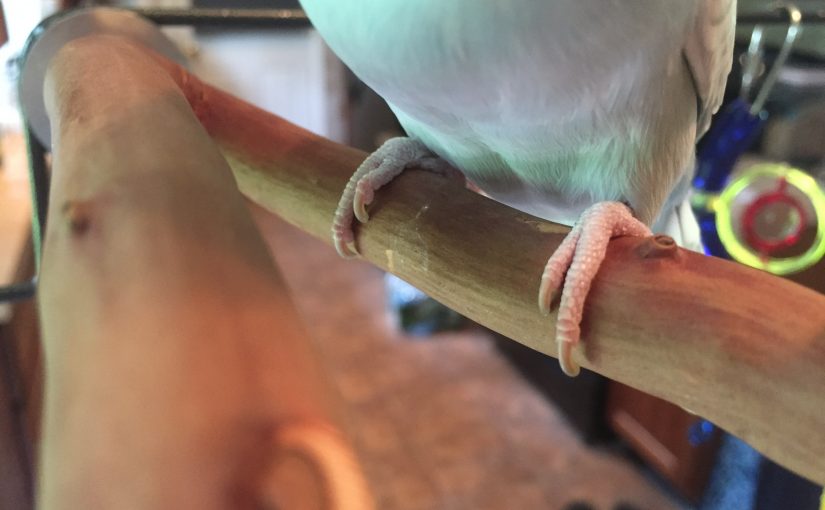 After our first total fail at parakeet nail clipping I sought help from my favorite Facebook Parakeet Group. It’s not usually my first instinct to crowd source ideas on social media but I was feeling so stumped and dejected by the abject failure that I really needed some other humans to help before I tried clipping a parakeet’s nails again.

I got tons of advise that ranged from taking the parakeets to a vet so we wouldn’t break their trust with us, to don’t take them to a vet for a nail clipping because they will probably have a heart attack and die!  So, we could safely assume that the answers lay somewhere in between those two extremes.

was a terrible idea, and that it would be much easier to use regular small Fingernail Nail Clippers

meant for humans. Another tip that I thought we should try was covering their faces while they were toweled to keep them calmer and reduce our risk of being bitten.

I also knew that we needed to separate the parakeets for the nail clipping and take the “patient” to another room where they wouldn’t distract each other. This meant that the other human would need to stay in the “waiting room” with the parakeet on deck to keep them quiet. We were thinking that a ton of flock calling would be just as bad as being in the same room.

We split up and Patrick took Toby to our bedroom and shut the door. I initially heard some flapping and evasion tactics but Patrick managed to secure her and make sure the towel (truly a cloth napkin) covered her face. From the other side of the door I heard the occasional snip of the nail clippers and some irritated squawking. After what felt like an eternity Patrick emerged triumphant! He managed to clip every single one of her nails, even though she was a squirmy worm, her head being covered meant she did eventually grow calmer, and using the human nail clippers was 100 times easier.

Next up was Kelly, she and Patrick came back out so quickly that I felt sure he had given up but again it was a rousing success!  Apparently with her head covered she gave up pretty quickly and stayed quite calm.

I should add that Patrick also feed them some Spray Millet

under the towel after every couple of nails to keep the experience somewhat positive.

Both Toby and Kelly were pretty mad immediately after the clipping, but Kelly forgot the whole ordeal after just a couple of minutes (except when she couldn’t dig her claws into our couch to pull herself up anymore!).  Toby, on the other hand, has decided to hold a grudge, but weirdly not against Patrick.  She’s mad at me, which I really can’t figure out since I had nothing to do with it. I have known her to stay mad for several days, but I’m determined to win her back over!

To sum it up, the keys for us were separating the parakeets, toweling them with their heads covered, giving them lots of millet, and using small human nail clippers. Patrick did such a great job that I don’t think we’ll need to worry about it again for a while, but it’s such a relief to know that we can manage to get the job done! It’s also really nice to not have parakeets getting their nails stuck in our shirts all the time 🙂